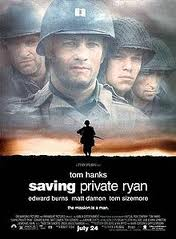 Steven Spielberg is a closet gorehound, and the MPAA loves him so much they let him get away with anything. Not to take away from his enormous gifts as a filmmaker, but because he’s Steven Spielberg, he got to sever limbs, melt faces and rip out hearts in his early 80s PG movies (PG-13 was arguably created for him). When he decides to make important movies, he gets to spill intestines, explode bodies and show more gunshots to the head than an Italian zombie flick, and still earn an R rating.

Saving Private Ryan is an important movie, because important movies can get away with disembowelings, imploded faces & dismembered limbs without getting slapped with an NC-17, especially when Spielberg's directing. If the MPAA wants to indulge the man's secret passion for splatter cinema, that’s fine, but how about giving George A. Romero the same leniency when he makes a zombie picture?

And it isn’t just the MPAA who considered Saving Private Ryan important. ABC did, too; they showed the damned thing uncut on TV. No one complained.

And teachers...especially social studies teachers? Man, they love the film. As an educator myself, I’ve known some high school teachers who justified showing Saving Private Ryan in class by arguing its historical importance. The flaw in that argument is that the movie itself is not actually a true story. Screenwriter Robert Rodat was initially inspired by a Civil War monument dedicated to eight brothers who died in battle, then loosely based the premise of his screenplay on four brothers who fought in WWII, two of whom died. But in reality, there was no Private Ryan who lost three brothers, nor was there a troop-led mission to save him.

But that’s just nitpicking about petty details which aren’t really important to the effectiveness of the film. Saving Private Ryan is a great, emotionally devastating movie that should have won the Best Picture Oscar in 1998 (losing to Shakespeare in Love, for chrissakes). But there are also a lot of people who treat it like some historical document, and simply watching the movie will educate you about WWII.

Sure, the Normandy Invasion sequence (roughly the first 30 minutes of the movie) is an ultra-graphic and realistic depiction of battle. Saving Private Ryan might be the goriest important movie ever. This opening sequence features the most grueling war footage ever shot, even though it really has nothing to do with the story. Bombs and bullets fall like rain, ripping soldiers to ribbons. One guy’s screaming for his mother while his bowels spill out; another is staggering around on the beach, searching for his own severed arm.

I’m still troubled by any social studies teacher’s decision to show the movie in class, other than it’s a great way to kill three class periods they would have otherwise spent teaching. Yeah, we learn the various ways mortar fire can rearrange the human anatomy, but the film itself does not delve into the politics, purpose or causes of WWII, nor America’s involvement. That’s not a criticism of the movie itself, and no, I do not think the film is too violent for kids to handle (they're the main reason there's five Final Destination movies). It is a criticism of anyone thinking the film is an academic learning experience. When my oldest daughter watched it in her high school history class, all she really learned was what FUBAR means.

I’m not upset with these teachers, though maybe just a little bit envious. I teach middle school English, and there aren’t too many opportunities for me to pop in a DVD for three consecutive class periods fwhile I check my fantasy football stats on the computer. And without a doubt, there are no movies as bloody as Saving Private Ryan that I could show without being called into my principal's office, verbally berated and ultimately fired.

As for the story itself, Tom Hanks plays Captain Miller, the uncertain leader of a small platoon assigned to wander the war-ravaged French countryside to locate a soldier, whose brothers have all been killed, and take him home. When they finally locate him, Private James Ryan (Matt Damon) refuses to leave his platoon, whom are preparing to face more Germans in an already battle-ravaged town. If I were Hanks, I would have said, “Fine, go ahead...get your ass blown off, dumbass.” Then I would have taken off to shack-up with a busty French prostitute until the war was over.

I guess that’s why no one lets me make movies.

But Hanks and his men feel obligated to stay and help defend a bridge the Germans want. The climactic battle that ensues is long, loud and just as violent as the Normandy scenes. German tanks blow the shit out of everything, while the out-numbered Americans make-do with what they have. Most of the cast dies, and I don’t think I’m giving anything way when I say they do end up saving Private Ryan, who should feel like a real asshole for making these guys stick around. Maybe that’s why he is seen weeping at the beginning of the film, perhaps thinking, “I was a real dick, wasn't I?”

Still, this is a great movie, an important movie, with phenomenal performances, great characters, a compelling story and, unless you’re utterly soulless, a resolution that will bring tears (even though it doesn't explain why Ryan is able to recall the Normandy Invasion, since he wasn't there).

But does that mean the MPAA should make a distinction between important violence and unimportant violence? If Saving Private Ryan can be given an R rating because the violence reflects reality, then shouldn't a sleazy celluloid suppository like 1980’s Maniac, about a serial killer who kills and scalps young women (released unrated due to its violence), have been given the same consideration. After all, sicko serial killers are every bit as real as WWII.

And does that mean that if a hack like Uwe Boll had directed this instead (yeah, that’s really stretching, but work with me here), he’d be given the same consideration by the MPAA as someone with the Hollywood clout as Spielberg?

And finally, does that mean a teacher can justify showing it to a classroom full of kids? I don‘t think there is a parent alive who wouldn’t agree that climbing into a stranger‘s van is a bad idea. So shouldn’t we show all of our kids The Silence of the Lambs in order to teach this lesson?