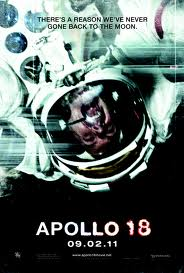 I’m starting to really hate “found footage” films...you know, that genre where the actors themselves do most of the actual work documenting the story as it’s happening with hand-held video cameras. They are cheap to make and easy to market.

The Blair Witch Project proved that. The movie itself, depending on who you ask, ended up costing anywhere from $20,000 to $750,000, but through the most genius viral-marketing campaign of all time, it made over $200 million at the box office. This is a movie that had no actual screenplay, just a 68 page outline. The actors, using their real names in the film, mostly improvised all their lines.

This obviously convinced a slew of other would-be filmmakers to do the same thing. We’ve been inundated by found footage flicks ever since, the most successful being Paranormal Activity, which was cheaper than Blair Witch and made even more money. Even a few major studios have jumped on the bandwagon. Cloverfield had 60-times the budget of Blair Witch, but was still relatively cheap compared to, say, Transformers.

But I don’t hate this genre because a few amateur directors have gotten rich inducing motion sickness. The more power to them! I wish I had thought of getting a few people to film themselves screaming in horror at bundles of twigs. And I have to admit, though it’s a tad overpraised, Paranormal Activity is creepy because it is shot by the actors. But most found footage films are total shit, simply using the gimmick because it is cheap, not because it’s the best way to tell the story.

Such an example of decent storytelling in the found-footage genre is Apollo 18, a low-budget and claustrophobic sci-fi thriller that, even though underappreciated by both critics and audiences, uses this style to its advantage. It isn’t a “great” film (I don’t think it is possible for found footage movies to achieve such status), but it is an effective one, mainly because its entire story depends on found footage. Ask yourself this question...when watching a found footage film, would the movie have been better if it were filmed in the traditional manner? If the answer is yes, then the movie is shit. If the answer is no, then you’re watching a film made by someone who really understands the genre. Apollo 18 falls into the latter category. 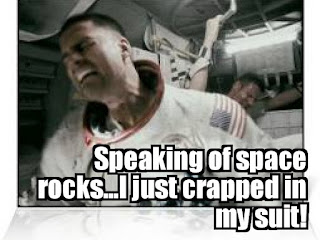 Apollo 18 is about three astronauts enlisted for one last trip to the moon, even though NASA had officially scrubbed every flight after Apollo 17. This mission is top secret and will not be shown on TV or reported to the media. Reasons for the mission are not initially given, but we soon learn them when weird-ass shit starts happening once they land. It turns out that the Russians have previously landed there, too. Not only that, there are creatures living there that we once mistook for moon rocks.

I’ll be the first to admit that the revelation in Apollo 18 is stupid...crab-like critters who can survive in a zero-atmosphere environment. But what makes the movie such a great example of found footage is the painstaking effort for authenticity. We experience the utter monotony of space travel, we see what a pain-in-the-ass it is to perform even the most menial of tasks within the cramped confines of a space capsule, we are made to feel how utterly helpless and alone these astronauts are, even though they are in constant contact with Earth. This is one of the few films that make space look like a truly shitty place to be.

Best of all, we feel like we are really watching video footage from the 70s (when the story takes place). It looks old, worn and dated, and the characters are just as effectively bland as the real astronauts NASA shot into space 40 years ago (at least until these crab-critters start attacking). It is obvious a lot of effort was put into making this film look like the time when the story takes place.

And, as dumb as the premise is, these space crabs are kinda creepy, especially when only briefly seen through video cameras.

Apollo 18 is often excruciatingly slow moving; there are countless scenes when it seems like absolutely nothing is happening. Yet, if you were to look away for a second, you’d miss the only reason the camera is focused so intently on a single mound of rocks. This is a film that could not have been made in the traditional manner. It may not ultimately be an exciting film, but it is arguably one of the most effective uses of found footage as a vital part of the story.

How effective? Well, this is why I am growing to hate found-footage films.

They turn a lot of people into dumbasses.

For those of you who do not remember, the genius of the marketing campaign for The Blair Witch Project stemmed from its own promotional website, which was so-well put together that millions thought the film was an actual documentary. The same goes for Paranormal Activity. Legions of idiots thought they were watching a true paranormal event, simply because the movie was improvised and shot on video by its cast. I am sad to say, but there is something about hand-held video footage that convinces many people what they are seeing is real.

But this is the 21st Century, when people laugh at those old idiots once convinced by Orson Welles that a Martian invasion was taking place on Halloween in 1938. We’ve moved beyond such gullibility, right? Believing in malevolent ghosts is one thing, but killer space rocks? No one is that stupid.

My oldest daughter, a junior in high school, told me of a classmate who just saw Apollo 18 and, because it looked like authentic 70‘s video, was convinced he was watching historical footage, and asked their science teacher about killer moon rocks.

You might be saying to yourself, “That’s just a single dumbass. One guy out of a classroom of 30.”

Yeah? Try this bit of math. Several years ago, there was a survey asking 1000 American adults from various backgrounds who they thought was the greatest American of all time. There was a plethora of expected responses - Lincoln, Washington, King, Kennedy - along with a few delusional suggestions like Michael Jackson and Elvis Presley. But 1% actually responded with Jesus Christ.

1% may not seem like very much, but think about it...surveys are supposed to be a reflection of the population in general. There are roughly three-hundred-million people in this country right now. One percent of that is three million. That means there are three million people walking around right now who think, not only is Jesus Christ our lord and savior, but that he’s an American.

And that’s what I hate about found footage films, especially those which do their jobs as effectively as Apollo 18.
Posted by D.M. Anderson at 5:08 PM