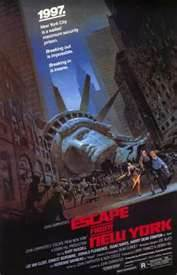 I was 17 when I first saw this, and it was probably the first movie since Jaws that I became truly obsessed with. This was back when the year 1997 (when the film takes place) was still the distant future, Kurt Russell was still mostly known for all those Walt Disney comedies, and John Carpenter was still making really good movies.

I loved everything about Escape from New York...the Big Apple depicted as an urban hellhole, the morally-questionable characters, the bleak and cynical view of the future, the synthesized music score (yeah, it sounds kinda cheesy today, but back then it was cool enough to persuade me to buy the soundtrack), not to mention what is still the most awesome twist ending of any movie ever made.

But most of all, I loved Snake Plissken, the first main character I'd ever seen in a movie who could be called an anti-hero. The guy is a total badass, not giving a shit about anything or anyone. Seeing someone like Kurt Russell play the role was a revelation, and he does such a great job that I was able to overlook the questionable special effects (even for 1981). Plissken was so fucking cool that I even tried growing my hair out so I could look more like him.

I suppose if the term man-crush existed back then, it might have applied here.

Years later, when the belated sequel, Escape from L.A., came out, I found myself not caring one bit how stupid the movie was, just so long as I could see Snake in action one more once again. Self-parody or not, Escape from L.A. really was fucking stupid, yet Plissken himself was still mean, cynical and totally cool, even when surfing a tsunami down Wilshire Boulevard or shooting hoops to save his own life.

I remember reading somewhere that, if Escape from L.A. was a hit, Carpenter had an idea for a third film, Escape from Earth. But the sequel totally tanked in theaters, which essentially meant there would be no more Snake Plissken in my future. A sad day indeed. So all I have of Snake is these two films, one good, one bad. Yeah, there was a short-lived comic book series, but try as I might, I've never been able to embrace comic books much. Although I was always an extreme movie geek, somehow the idea of being a comic book geek was truly repellant.

Of course, we are now living in an era where re-booting a franchise is the norm, and I've heard of plans to remake the original Escape from New York. I also heard that original Escape director John Carpenter is totally on-board with the idea, probably because he hasn't made a great movie since The Thing. In fact, he's probably made more cash from the remakes/prequels of his early movies (Assault on Precinct 13, Halloween, The Fog and The Thing) than he ever did with his originals. 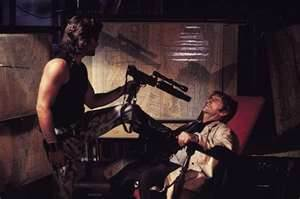 This remake news was yet-another reminder of how old and out-of-touch I am becoming. Rather than get excited at the news, the first thing I thought was, "No...you can't." No one could possibly replace Kurt Russell as Plissken, just like no one could replace Anthony Perkins as Norman Bates (just ask Vince Vaughn). With all due respect for the actors that have, so far, been attached to reprise the role of Plissken (most notably, Gerard Butler, and recently, Jeremy Renner), none of them are Russell, the guy who had a huge hand in creating the character.

You know, I should be happy that there are enough folks in Hollywood still willing to give this dead franchise a second chance. Escape from New York is a cult classic now, but it didn't exactly set the box office on fire back in '81. And Escape from L.A. was a certified bomb. Maybe by rebooting the franchise to appeal to modern audiences, with faster action and better special effects, it could finally be successful enough to warrant a third chapter, perhaps the aforementioned Escape from Earth.

Yeah, and Timothy Dalton was a perfectly suitable replacement for Clark Cable in the TV sequel to Gone with the Wind. Kurt Russell is Snake Plissken, just like Peter Sellers is Inspector Clouseau, and Gene Wilder is Willy Wonka.

As much as I'd love the adventures of Snake Plissken to continue, it can't be done without Russell, and he's probably too old at this point. Sure, you could replace him with someone younger and surround him with CGI, but doing so would just make Snake a brand name to hook older movie geeks like me. But I can count on one hand (without using every finger) the number of remakes which were better than the original

Yeah, I'd probably pay to see a remake of Escape from New York, but at my age, I doubt I could separate myself from the original thrill I got from watching Snake kick total ass back in 1981. I do not think there's anything that can be added to the original story or it's iconic anti-hero that would make me appreciate a remake on its own terms, even thirty years later.

Leave this one alone. You aren't gonna make it better.
Posted by D.M. Anderson at 3:02 PM