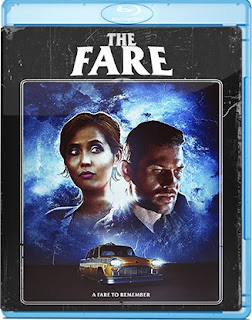 Harris (Gino Anthony Pesi) is a weary cabby driving a desolate stretch of road to pick up his last fare for the night, a young woman named Penny (Brinna Kenny). “Like the coin,” he says jokingly. Then after a few minutes of congenial small talk, she literally disappears.

Initially shaken, Harris resumes driving...on a desolate stretch of road to pick up his last fare for the night. Once again, it’s Penny (“Like the coin,” he jokes again). Their conversation is similar, though there’s something slightly different about their words and reactions. And once again, she disappears. The two relive the same scenario over and over, remembering more details from previous encounters (and growing closer each time). They appear to be trapped in some kind of temporal loop from which they can’t escape.

Playing very much like an extended Twilight Zone episode, The Fare is a small film with big ambitions and is clearly constructed to set up its big payoff, which is not-so-much a twist ending as an inevitable one, especially when it becomes obvious Harris & Penny are not reliving the same 20 minutes. Whether or not that revelation is worth the effort depends on the viewer’s patience. The film is often haunting and atmospheric, with likable performances by its two leads. However, it does grow a little repetitive during the middle act. One can’t help but think Rod Serling could have presented the same story in a fraction of the time.

But while the finale may not be jawdropping, at least it isn’t a red herring-laden suckerpunch. The Fare is visually and conceptually interesting enough to keep most viewers engaged, especially those who recall their middle school mythology lessons.