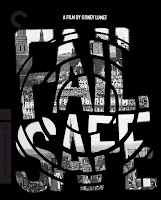 The Original FAIL SAFE (1964) on Blu-ray 1/28 from Criterion Collection
This unnerving procedural thriller painstakingly details an all-too-plausible nightmare scenario in which a mechanical failure jams the United States military’s chain of command and sends the country hurtling toward nuclear war with the Soviet Union. Working from a contemporary best seller, screenwriter Walter Bernstein and director Sidney Lumet wrench harrowing suspense from the doomsday fears of the Cold War era, making the most of a modest budget and limited sets to create an atmosphere of clammy claustrophobia and astronomically high stakes. Starring Henry Fonda as a coolheaded U.S. president and Walter Matthau as a trigger-happy political theorist, Fail Safe is a long-underappreciated alarm bell of a film, sounding an urgent warning about the deadly logic of mutually assured destruction.

COUNTDOWN Available on Digital 1/7 & Blu-ray and DVD 1/21
What if your phone could tell you when you’re going to die? Would you want to know? There’s a killer new app in COUNTDOWN, the terrifyingly original and inventive horror-thriller from STXfilms and Universal Pictures Home Entertainment. The film follows a young nurse who downloads an app that claims to predict exactly when a person is going to die. With only three days left to live and death closing in, she must find a way to save her life before time runs out. Combining “jump scares around every corner” (Kimber Myers, Los Angeles Times) and intense suspense, COUNTDOWN chronicles a frightening twist on the consequence of technology’s invasion of our lives. 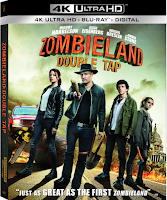 ZOMBIELAND: DOUBLE TAP on 4K Ultra HD, Blu-ray & DVD 1/21
Set one decade after the events of the first film, ZOMBIELAND: DOUBLE TAP finds Tallahassee (Woody Harrelson), Columbus (Jesse Eisenberg), Little Rock (Abigail Breslin), and Wichita (Emma Stone) working together as a well-oiled, zombie-killing machine with a new home in the now-vacant White House. These four slayers must face off against the many new kinds of zombies that have evolved since the first movie, as well as some new human survivors. But most of all, they have to face the growing pains of their own snarky, makeshift family. The bonus materials for ZOMBIELAND: DOUBLE TAP include audio commentary by Ruben Fleischer, a hilarious blooper reel, nine alternate & extended scenes, and several behind-the-scenes featurettes diving into the making of the film and more! 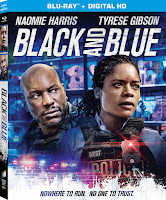 BLACK AND BLUE on Blu-ray & DVD 1/21
BLACK AND BLUE is a fast-paced action-thriller about a rookie cop (Academy Award nominee Naomie Harris) who inadvertently captures the murder of a young drug dealer on her body cam. After realizing that the murder was committed by corrupt cops, she teams up with the one person from her community who is willing to help her (Tyrese Gibson) as she tries to escape the criminals out for revenge and the police who are desperate to destroy the incriminating footage. 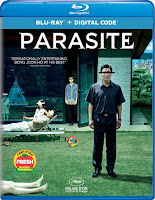 PARASITE on Blu-ray 1/28
Meet the Park family, the picture of aspirational wealth. And the Kim family, rich in street smarts but not much else. Be it chance or fate, these two houses are brought together and the Kims sense a golden opportunity. Masterminded by college-aged Ki-woo, the Kim children expediently install themselves as tutor and art therapist to the Parks. Soon, a symbiotic relationship forms between the two families. The Kims provide "indispensable" luxury services while the Parks obliviously bankroll their entire household. When a parasitic interloper threatens the Kims' newfound comfort, a savage, underhanded battle for dominance breaks out, threatening to destroy the fragile ecosystem between the Kims and the Parks. By turns darkly hilarious and heart-wrenching, Parasite showcases a modern master at the top of his game. 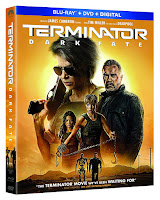 TERMINATOR: DARK FATE on Blu-ray 1/28
Decades after Sarah Connor (Linda Hamilton) prevented Judgment Day, a lethal new Terminator is sent to eliminate the future leader of the resistance. In a fight to save mankind, battle-hardened Sarah Connor teams up with an unexpected ally (Arnold Schwarzenegger) and an enhanced super soldier to stop the deadliest Terminator yet. Humanity's fate hangs in the balance in this action-packed thrill ride from Tim Miller, the Director of Deadpool, and Producer James Cameron.
Posted by D.M. Anderson at 9:39 AM