The One-Sided BATTLE OF LENINGRAD 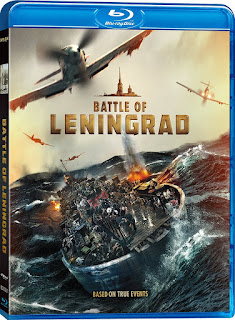 Battle of Leningrad – originally titled Saving Leningrad – is somewhat misleading. In fact, it’s more of a pummeling of Leningrad by the Nazis, while its civilians evacuate on leaky barges to escape across Lake Ladoga.

Most of the film takes place on Barge 752 during its perilous journey, with some manufactured melodrama from characters who are essentially plot devices (including a pampered pooch). The most contrived subplot is the main one, which has young soldier Kostya abandoning his squad to join his girlfriend, Nastya...on orders from his own father, a high ranking Russian colonel. Nastya considers him a deserter, while Kostya does nothing to advocate for himself. A Kremlin investigator, Vadim, is also on-board to repeatedly threaten both of them, because I guess the Nazis aren't enough bad guys.

Even getting to that point takes awhile. Battle of Leningrad is pretty dull and aimless until then, serving up subplots and characters we assume will be of greater importance later on (though most aren’t). Once the barge sets off on its trip, however, things get more interesting. Not the characters, mind you, but it turns out the Nazis are aware of Russian plans to evacuate Leningrad and send fighter planes to attack the defenseless boats. Barge 752, already crippled by a violent storm, is a sitting duck.

The storm and aerial attack scenes pretty much save the movie. We may not care who lives or dies, but their peril looks and feels authentic, bolstered by fine editing and impressive visual effects. The same goes for the brief-but-intense skirmish between the Russian and Germans early in the story, which is suitably gritty and brutal.

While Battle of Leningrad is based on a tragic true event during World War II, the film is ironically at its most rousing when depicting death & destruction. That alone might make it worth checking out for war movie mongers, but none of its characters are compelling enough to create any emotional investment. Except maybe the dog.