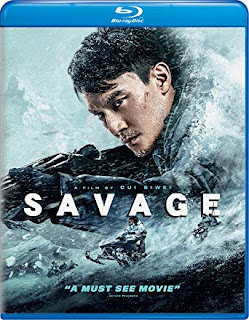 Somewhere in this movie is a truly great thriller. But while Savage is certainly watchable, it’s marred by some unnecessary story elements and convoluted character development.

It starts off great, with a trio of bad guys who hijack a gold-carrying armored truck by causing a snowy avalanche. They shoot two cops on the way down the mountain, killing one of them. The other manages to get away.

At this point, one would reasonably expect a cat-and-mouse thriller, pitting a lone, outnumbered cop against heavily-armed killers. Instead, the story flashes forward a full year. Wang (Chen Chang) has physically recovered but still hasn’t gotten over the death of his partner, Han. Complicating matters is the fact both were once vying for the same woman, local doctor Sun Yan (Ni Ni). Guilt-ridden, Wang can’t bring himself to commit to her. This dynamic is of little interest and really only exists to put her in peril, because...

...it turns out the robbers didn’t take the gold off the mountain with them. I’m not certain why, since they had a truck that could do the job. Instead, they stashed it in the woods and have now returned to get it. Naturally, Wang is on-hand to try and stop them, as well as avenge his partner. What the narrative doesn’t need is Ni Ni driving up the mountain to find him during a massive blizzard, which eventually strands all of them in a snow lodge. The movie was doing just fine without her.

Still, it’s a tense little thriller at times, especially during the Reservoir Dogs-like stand-off in the lodge. It also makes great use of its snowbound locations, to the point the viewer can practically feel the cold. However, writer-director Cui Siwei seems uncertain what to do with his primary antagonist (Fan Liao). First, he’s a cold-blooded killer, then introspective and philosophical – even threatening to appear empathetic - before reverting back to being a cold-blooded killer. It’s as if Cui briefly tried to give him some complexity before second-guessing himself.

As it is, Savage is entertaining and suspenseful enough to warrant a watch, but the viewer has to wade through some irrelevance and plot contrivances to get to the good stuff. If Cui Siwei could have tightened things up a bit, he’d have a pretty damn good movie on his hands.