COME ON FEEL THE NOIZE: Born to Be Mild 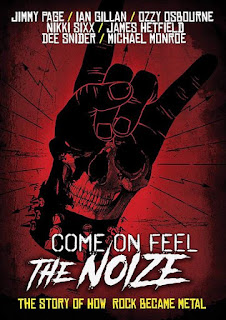 A lot of Noize, to be sure, but not much substance.

Come on Feel the Noize purports to be “the story of how rock became metal,” an interesting enough topic, though it's covered much more thoroughly – with more focus – in some of Sam Dunn’s documentaries. The film actually ends up being kind-of rudderless, particularly at the point where it delves so heavily into how punk became new wave that Blondie ends up with more screen time than Judas Priest.

Though haphazardly assembled, a lot of seldom seen performances from legendary artists are included, much of it lifted from a German TV show. One gets the impression the narrative was built around footage the producers were able to acquire, which might explain the near absence or mention of several indisputably influential bands. On the other hand, this may be the first and only opportunity to see Motorhead performing “Orgasmatron” with Lemmy slathered in corpse paint. That alone might be worth the price of admission for some viewers.

Also featured are many interviews, including the one and only Jimmy Page, not generally known to show up in these things. Too bad he only appears for a brief comment or two, while Michael Starr (from the parody band, Steel Panther) is given an inordinate amount of screen time to philosophize about rock & roll. In fact, the film eventually ceases exploring metal’s origins altogether, content to showcase a hodge-podge of current artists, few of whom add anything substantial to the genre’s evolution or history.

Still, it’s the rare performance footage that makes Come on Feel the Noize worth checking out. We’ve all seen Led Zeppelin perform “Whole Lotta Love” before, but probably not in a video punctuated by female nudity (gotta love Germany’s decidedly more-relaxed broadcast standards). As a documentary, however, it frequently strays off topic and ignores too many significant artists & milestones to be considered anything more than a superficial overview.