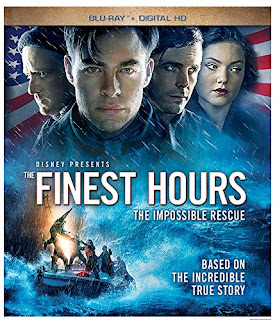 In 1952, during a nasty winter storm off the coast of Massachusetts, the SS Pendleton split in half. While the bow sank like a stone, the stern remained afloat with over thirty crewman still onboard. It was then left to young Coast Guard crewman Bernie Webber to take a tiny boat with a hastily-assembled crew and rescue them before the rest of the ship sinks.

The Finest Hours is Disney’s depiction of this true story, based on a book by Michael J. Tougias & Casey Sherman. When the film focuses on the disaster and rescue, it’s quite thrilling, boasted by terrific special effects and gritty action. Between the stranded crew’s efforts to stay alive, led by stoic engineer Ray Sybert (Casey Affleck), and Webber (Chris Pine), battling the worst tidal forces you’ll ever see onscreen, the film is often exciting and suspenseful.

However, stalling momentum are the numerous intrusive scenes which take place on land. Initially, Webber’s budding romance with to-be-bride Miriam (Holliday Grainger) is charming, but her plight - awaiting news of the rescue - eventually starts sucking us out of the crisis-at-hand. Another subplot dealing with one man’s resentment of Webber (for allegedly botching a previous rescue attempt) is touched upon but never really explored, nor do we ultimately care, since it essentially peters into nothing.


Most of the characters are also pretty static. Pine is good in the lead, but given little to work with. Ultimately, we don’t learn a hell of a lot about this man who led what’s considered the greatest Coast Guard rescue in history. And while Grainger may be cute as a button, her character isn’t given much to do other than wait for her man to return. Ray is by far the most interesting character in the entire film. As played by Affleck, he’s intense, resourceful and intuitive. We learn about him more through his actions (and what others think about him) than what he actually has to say. Had the film focused more on Ray and his efforts to survive despite conflicts with the crew, this would be one hell of a movie.

As it stands, though, The Finest Hours remains a well-acted, visually arresting depiction of a real-life disaster and rescue. From a technical standpoint, that alone is enough to keep our attention. Still, the whole experience isn’t likely to stick with the viewer for too long afterwards.