THE GODFATHER PART III and the Divine Delivery 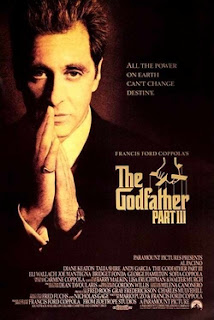 There's nothing better than speedy service, especially when it comes to food.

I remember when Domino's used to tout their 30-minutes-or-less guarantee. If your pizza wasn't at your door within a half-hour of ordering, it was free. The guarantee was later reduced to three dollars off, presumably because of guys like me. This was in the mid 80s, when I lived in a tough-to-find third story unit of a massive apartment complex (I also made sure the porch light was off in order to make my apartment number harder to read). For quite a stretch, I got a lot of free meals courtesy of Domino's. But they eventually caught-on because I smoked a lot of weed in those days and Friday nights just weren't the same without tearing into a pepperoni pizza with extra cheese at 11:00 PM. By then, I was on a first name basis with most of the Domino's drivers, who were now able to get to my place with time to spare. One driver managed to knock on my door 17 minutes after I called, which had to be some kind of local record.

Domino's has since backed off from the 30 minute guarantee after being sued a few times by those whose loved ones were pancaked by overzealous delivery drivers. Too bad, really. While I'm sad for those who met their untimely demise from an unfortunate encounter with an AMC Pacer with a Domino's sign on the roof, it sure was great having a piping hot pizza in-hand before you even had the chance to locate your wallet.

But Domino's exemplary expediency has nothing on the priests and cardinals milling about the Roman Catholic church, as demonstrated in The Godfather Part III.

The Godfather & The Godfather Part II are, of course, the greatest one-two punch in movie history, both films winning Best Picture Oscars. Even today, they remain supreme examples of timeless storytelling and provide a strong argument that the 70s may have been Hollywood's true Golden Age. If you don’t agree with this assessment, you are either 15 years old or strongly believe Zack Snyder is a misunderstood genius.

As for The Godfather Part III...well...

There was once an NFL quarterback named Archie Manning. Two of his sons, Payton and Eli, not only became NFL quarterbacks themselves, but won two Super Bowls each (something even their dad couldn’t accomplish). Archie’s third son, Cooper, never got any closer to a pro football career than being a broadcaster on Fox Sports (I’ll bet those family reunions are awkward). If director Francis Ford Coppola is cinema’s Archie Manning, creating his own Payton & Eli with the first two Godfather films, then Part III is definitely his Cooper...the little engine that couldn’t.

That isn’t intended as a slam against Cooper Manning or Godfather III. Cooper was also a talented ballplayer with a promising football future before nerve damage ended his career while still in college. The Godfather Part III, despite a lot of retro-hate thrown its way, is actually a very good film. It simply doesn’t compare to the first two because a third chapter to the epic Corleone saga was never really necessary. It was also made for the wrong reasons, and probably a decade too late.

Even though Coppola agreed to do it because he needed the money, The Godfather Part III doesn’t play like a cynical cash-grab. He and original Godfather author Mario Puzo obviously put a lot of effort into its complex story (inspired by real events happening at the time the film takes place), and cinematographer Gordon Willis returned to give it the same unique look as the other two. Coppola managed to squeeze in as many returning characters as possible and nabbed most of the surviving original cast, though Robert Duvall refused to return as Tom Hagen because his salary didn’t equal Al Pacino’s. Even some of the new characters, like Andy Garcia as Vincent Corleone, fit right in with the old guard.


The film isn’t without its faults, most notably the infamous miscasting of Coppola’s daughter, Sofia, in the pivotal role of Mary, Michael Corleone’s daughter, even though her acting experience was limited at best. Duvall is sorely missed, and simply replacing him with George Hamilton is like The Beatles deciding to fire Paul McCartney in favor of Gene Simmons. Paramount should have bitten the bullet and paid up. The film also dedicates a significant amount of its running time wallowing in Catholic guilt (mostly Michael’s).

And it’s during one of these moments when Michael is seeking redemption that has me thinking the Catholic church has speedy service down to a fucking science. It’s also possible that I’m focusing on a stupid minor detail of no real importance, but I thought I’d point it out anyway, since it’s a surprisingly lazy scene for someone as normally meticulous as Coppola...

While in Sicily to attend his son’s debut in an opera, an ailing Michael Corleone (Pacino) visits a Catholic cardinal and is talked into confessing his sins. Just before that, he suffers a diabetic attack. He begs the cardinal for something sweet, like juice or candy, to counter the effects. Not even fifteen seconds later, with no indication that any more time has passed than what we see onscreen, another priest arrives with a silver tray of exactly what Michael asked for: a pitcher of OJ and some chocolate bars, which Michael gratefully wolfs down.

That’s really fucking fast. I can’t even fill my own Big Gulp cup at 7-Eleven in the same amount of time. Hell, that’s faster than it takes for me to throw open a cupboard and grab a bag of Funyuns when struck with a sudden case of midnight munchies. In reality, even if the church had exactly what Michael needed in stock, it would still take at least a minute to run into the kitchen for a half-assed dash-n-grab, to say nothing of neatly placing everything on a sterling silver tray.

So either the Catholic church is populated by psychics, they’re used to visits from severely diabetic gangsters or these priests were former Domino’s delivery drivers. At any rate, it’s odd that Coppola would feel the need to shave the film’s running time by severely condensing this particularly intense moment, yet still subjected us to a prolonged (and icky) scene of Mary and her cousin Vincent exploring the inherent eroticism found in rolling pizza dough together.

I’m being way too analytical, of course, because I doubt most people who’ve seen this film ever noticed this temporal discrepancy. And even if they did, who’d care? I don’t actually care all that much either, but if The Godfather Part III was as masterfully told as the first two classics, chances are it would have never crossed my mind.

We do, however, need to get some of those priests back behind the wheels of pizza trucks.
Posted by D.M. Anderson at 9:35 PM