ROLLERCOASTER and the Stemming of the Tide 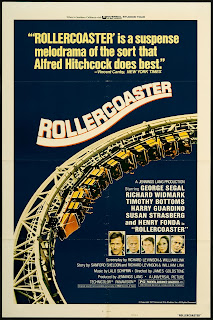 Seeing Rollercoaster in 1977 was mind-blowing.

It’s no masterpiece. Coming near the tail end of the 70’s disaster movie craze (and promoted as such), the film promised epic destruction, but was mostly a standard cat-and-mouse thriller. Nor was it technically groundbreaking in any way whatsoever. Rollercoaster was originally presented in Sensurround, a sonic toy developed by Universal Studios involving the use of Volkswagen-sized speakers installed in selected theaters which emitted a bass-heavy rumble that you felt more than heard. These days, you’ve undoubtedly experienced the same sensation when stopped at a traffic light next to a teenage driver whose Kanye West jams split the asphalt and rattled the fillings out of your head.

1974’s disaster epic, Earthquake, was the first Sensurround film. The gimmick rendered it an amusingly immersive experience (and drew our attention away from the wretched writing & piss poor performances). By 1977, however, the novelty had mostly worn off (especially with Star Wars wowing everyone that summer). Along with numerous POV shots to make the viewer feel like they were sitting in the lead car, the use of Sensurround in Rollercoaster was gratuitous and intrusive.

Though obviously created to exploit a dying gimmick, Rollercoaster didn’t really need Sensurround. Production-wise, it’s only a notch or two above the typical ABC Movie of the Week being churned out at the time, but as a mildly diverting thriller, it kind-of works. George Segal is Harry Calder, a park safety inspector tasked with helping thwart the plans of an enigmatic bomber (Timothy Bottoms), who threatens to blow up rollercoasters around the country until the park owners pony-up a million dollars (the standard ransom of all movie villains in the 70s). Those hoping for the destructive thrills of your typical disaster movie are in for a letdown, since there’s only one initial coaster crash to get the plot rolling (which was originally a lot more gruesome and violent, but trimmed before the film’s release to earn a PG rating).

After the bomber is duped with a ransom payment of marked bills, Calder deduces the retaliatory target will be the grand opening of the Great American Revolution coaster at Magic Mountain. This was when Rollercoaster became mind-blowing, at least to any kid who didn’t live within driving distance of  Southern California's Magic Mountain.

In reality, the Great American Revolution was the very first coaster to feature a full vertical loop. While that not seem like a big deal today (even the crappy little carny park in my hometown of Portland has one), when the coaster opened to the public in 1976, it was revolutionary (no pun intended). It probably took Magic Mountain’s board of directors about three seconds before agreeing to let Universal prominently advertise their latest, cutting edge attraction in a feature film. On the big screen, this magnificent beast was epic and ominous, the type of dangerous dare where you stood in line and fought the urge to flee back in the direction of the less-threatening bumper cars.


Like so many other relics of my youth, the years have not been kind to Rollercoaster. Casting George Segal as the hero automatically rendered it worthy of inclusion in a time capsule. His prolific heyday was during the 70s, when he ventured back and forth between sex comedies and undemanding thrillers. He was always a congenial, decent actor, but essentially played the same guy in every movie. If you were alive in the 70s, there’s an 90% chance you’ve accidentally seen at least one film in which he appeared, though no one in moviegoing history has ever said, “Oh, look! The latest George Segal film is playing!”

Further dating the film is Sparks, a glam band who spent most of the 70s being touted as the next big thing (which never happened). They’re prominently featured during the Great American Revolution’s grand opening, belting out bubble gum tunes while a young Helen Hunt and hundreds of bell-bottomed extras rock out as if The Rolling Stones were playing. There’s a long standing rumor the producers originally wanted Kiss, who turned it down. If this is true, it would be quite ironic since their lone foray into movies was the made-for-TV cheapie, Kiss Meets the Phantom of the Park, also shot at Magic Mountain and an even sillier relic of the era, making Sparks look like Led Zeppelin in comparison.

Time hasn’t been too kind to the Great American Revolution either, which I was sad to discover when I finally visited Magic Mountain and rode it for the first time in 2006 (then simply called Revolution). The park had since been incorporated into the Six Flags chain and now boasted 19 rollercoasters, most of which were bigger, faster and scarier. In fact, when my wife and I were there, it took me awhile to even find the ride, twice passing by the humble, foliage-surrounded entry gate to what was once the park’s main attraction. There was no line at all, and compared to the high-speed, multi-looped, acrobatic thrills of the newer coasters which towered into the California sky, Revolution felt more like a kiddie ride.

It’s since been upgraded for its 40th anniversary (now called The New Revolution), which includes optional headsets so the rider can enjoy a virtual reality experience that apparently offers more thrills than the old coaster can provide on its own. As someone who grew up believing its once-revolutionary loop was the ultimate in theme park thrills, that’s kind of sad. But time relentlessly marches on and there’s nothing we can do about it. What was once new becomes old, and, like plastic surgery, simply giving it a make-over ultimately doesn’t stem the tide.
Posted by D.M. Anderson at 8:25 PM