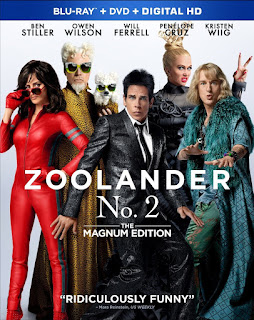 As far as belated sequels to once-popular comedies go, Zoolander 2 is far from the worst one ever made (Blues Brothers 2000 holds that distinction), but still suffers from the same basic problem that plagues most others: Only so-much time can pass - in this case, 15 years - before relevancy becomes an issue, especially if what you’re offering is simply more of the same. The original Zoolander was an amusing one-joke comedy, but didn’t exactly set the box office on fire and could hardly be considered a classic. It found a wider audience on home video, but I doubt too many were really pining for further exploits of Derek Zoolander (Ben Stiller) and Hansel McDonald (Owen Wilson). I could be wrong, of course.

After 15 years, it’s business as usual. Zoolander 2 begins with an admittedly funny sequence featuring a cameo by Justin Bieber (one of the film’s worst-kept secrets). Someone is killing beautiful celebrities around the world, at-least those taking duck-faced selfies. Interpol agent Valentina Valencia (Penelope Cruz) determines that only Derek and Hansel can help her uncover who’s behind the assassinations. It turns out all these dead rock stars have been trying to protect the decedent of Steve, who was at the Garden of Eden with Adam & Eve and whose bloodline can provide eternal youth. Since Will Farrell returns as Jacobim Magatu, I don’t think I’m spoiling who the culprit is.


For those who loved the original, you’ll be happy to know the usual series of familiar gags (ranging from dumb to hilariously-dumb) are recycled for another go-around, this time with Cruz and Sting thrown into the mix. And like the first film, the number of gratuitous celebrity cameos is massive (Bieber’s just the tip of the iceberg). However, because Zoolander 2's plot is flimsier and the premise is well-past its expiration date, the viewer is often distracted into playing a celebrity version of Where’s Waldo?.

This one flopped at the box office, perhaps because, like the original Zoolander, at home is where stuff like this plays best. Its singular joke is far more amusing to experience over and over when you aren't paying through-the-nose, making Zoolander 2 worth a rental for fans of the first film. Others beware.

NOT BAD...IF MORE-OF-THE-SAME IS WHAT YOU CRAVE