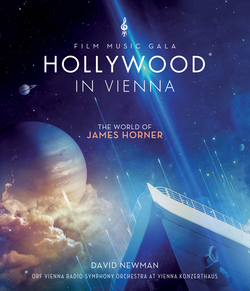 Varèse Sarabande, in partnership with Tomek Productions, will release a very special Blu-ray marking the first anniversary of the passing of Academy Award®-winning composer James Horner (TITANIC, APOLLO 13, BRAVEHEART).  HOLLYWOOD IN VIENNA: THE WORLD OF JAMES HORNER was recorded in Vienna, Austria, as a part of a celebration of his life and music. At the annual film music gala, celebrating the world’s leading film composers and produced by Sandra Tomek, Horner was awarded by the City of Vienna with the “Max Steiner Film Music Achievement Award”.

Varèse Sarabande will release the HOLLYWOOD IN VIENNA: THE WORLD OF JAMES HORNER Blu-ray through major platforms and retailers in June 2016.
Posted by D.M. Anderson at 5:11 PM