AVATAR: What "Meh" Was Created For 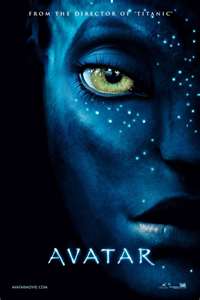 Yeah, yeah, I know...it's the biggest movie of the decade, biggest of all time. But Gone with the Wind might have been too, if they charged fourteen bucks a ticket back in 1939. Yeah, the giant  Smurfs are cool looking and the special effects are incredible. Once again, director James Cameron has pushed filmmaking technology to its limits. Visually, Avatar makes his last movie, Titanic, look like Mega-shark vs. Giant Octopus.

Of course, I had to see it. We all had to. If nothing else, just to see what kind of film costs as much money as it would take to solve the educational budget problems of an entire state. While I don't usually give in to hype, this is James Cameron we're talking about, whose movies have always been pretty damn cool. And, of course, his groundbreaking use of 3-D has to be seen to be believed. But what am I saying? You know that, because you saw it.
We all did.

Walking out of the theater after nearly three hours, the first thing I thought wasn't how awesome it was, but the painful throbbing in my ass. Actually, I was thinking that only 90 minutes into the thing, and it had nothing to do with the theater seats. I've sat through longer movies (The Green Mile, JFK, The Right Stuff, Titanic, Grindhouse, even a re-release of The Great Escape at a revival house, even though I already had it on DVD). But those were interesting enough to keep my mind off my posterior. Cheaper, too.

I know I'm in the minority regarding my meh-assessment of Avatar. Almost everyone I know declared how great it was, how astounding the effects were, how incredible the 3-D was.

And it isn't a bad movie. I didn't hate it or anything. Still, part of me wonders if some people felt obligated to love it because they had to sell one of their children to afford the ticket price, or were simply blown away by the admittedly-outstanding 3-D. Avatar is only the second 3-D film I've seen where the gimmick actually made the movie itself better.

The first one was in 1983, when Universal crapped all over its Jaws legacy by vomiting-forth Jaws 3-D. There isn't a person alive today willing to admit that movie was anything but an excuse to throw fake-looking body parts at the audience. But back then, in theaters, 3-D did make the film seem better than it really was, enough that we were willing to put up with the swelling headache (which felt like someone driving a corkscrew into your skull) we developed from wearing those cheap paper glasses. At least we weren't charged extra for the privilege.

But watching Jaws 3-D on TV a few years later, imaginatively retitled Jaws 3 because there was no 3-D TV back then, we saw the movie for the manure it really was. Even the special effects, which looked cool with glasses on, were so cheesy that it made the effects in the original Jaws look like...well, Avatar. I’m sure the producers didn’t mind, having scammed enough cash from us to justify Jaws: The Revenge, obviously green-lit by some misguided bonehead at Universal who assumed Jaws 3-D was successful because of its story. I’m certain that individual found himself unemployed soon after.

And it’s at home when you truly discover which movies are really worth watching a second time, when the story becomes more important. In the theater, I was blown away by Avatar’s incredible 3-D, at least until the point when my ass started to hurt and deja vu began to creep over me; I’d seen this movie before. And if you’ve ever seen Dances with Wolves, or Pocahontas or Ferngully: The Last Rainforest, so have you. Avatar tells the exact same story. Critics and trolls have been saying the same thing for a few years now. But originality isn’t the problem. Granted, Avatar is far more technically brilliant than all of those films combined, but only if you see it in a theater, in 3-D.

Lack of originality doesn’t really bother me much. The Godfather wasn't the first gangster picture, either. And even though he’s hardly had an original creative idea of his own, I’m a big James Cameron fan. I loved The Terminator, Aliens, The Abyss, Terminator 2: Judgment Day, True Lies and Titanic, but admit Cameron has always been a thief or borrower. Harlan Ellison, a contentious sci-fi writer who claimed the story of The Terminator was lifted from a few of Ellison’s Outer Limits teleplays, threatened to sue; Aliens is a sequel to Ridley Scott’s classic; True Lies is a remake of the French film, La Totale; the sinking of Titanic had been depicted in at least a half-dozen other movies. Terminator 2 is a sequel to his first film. That leaves The Abyss as the only 100% original Cameron film (ironic, since it is the only movie of his career generally to be considered a failure).

Again...originality? No big deal. If a studio wants to give Cameron $300 million to make Dances with Smurfs, fine with me. If Cameron can make us all grip our armrests as the Titanic sinks, even though we already know it’s going to, that’s saying a lot about his storytelling skill. And say what you will about his enormous budgets; no matter how many peoples he kills, boats he sinks, shit he blows up and effects artists he employs, in the middle of those movies have been characters we cared about (even when they were cyborgs). This is the guy who gave Arnold Schwarzenegger a film career, who made everyone take female action heroes seriously, and even managed to make Tom Arnold funny.

But I didn't care about the story or any of the characters in Avatar, two feats Pocahontas managed to accomplish in half the time. To those of you who saw Avatar only once, in 3-D on a giant 50-foot-wide screen, tell me one single classic & iconic scene, a snippet of quotable dialogue or a memorable performance by any of the actors. Hell, can you even name a single character?

Was Avatar great because it was in 3-D, or was it a great movie that just happened to be in 3-D? Try watching it a second time on your television and convince yourself it’s is as great as you remember it in theaters.

For me anyway, a truly great film is one I can still can still repeatedly enjoy long after the opportunity to see it again in theaters is gone. Avatar doesn’t qualify. Seeing the it without all the bells and whistles confirmed what it really is, a movie by filmmaker more in love with pushing technological boundaries than telling a compelling or original story. Sounds like another genius who once made a great film a long time ago in a galaxy far, far away.