THE TOWERING INFERNO: A Conspiracy Theory 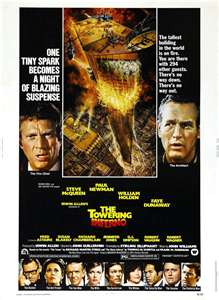 The Towering Inferno is an important movie. Not just because it’s the quintessential disaster film of the 70s. Not just because it was the first truly ‘grown-up’ movie I was allowed to see without my parents tagging along (and I watched in horror at the decidedly non-Disney deaths of people in leisure suits going up in flames). Not because this movie was, at the time, one of the most expensive films ever made. In fact, the ultimate historical importance of The Towering Inferno wouldn’t be felt for another 20 years, and then only by conspiracy theorists such as yours truly.

Like most people with a lot of spare time on their hands, I have a theory about what really went down during the O.J. Simpson trial (the former football star was accused of killing his wife and her lover). He didn’t get away with it because his dream team of lawyers did such a bang-up job in the courtroom, nor was it a lack of effort on the prosecution’s part. After all, they had overwhelming evidence pointing the finger right at him. No, O.J. Simpson got off because of The Towering Inferno, in which he has a supporting role as a security guard who takes the time to rescue a cat from a burning skyscraper. I have a sneaking suspicion that the jury, sitting in their hotel rooms after yet-another grueling day of listening to Johnny Cochran spout bad poetry (“If it doesn’t fit, you must acquit”), punched up an on-demand service, and by a remarkable coincidence, the only film available was The Towering Inferno. Upon viewing this manipulatively tender moment halfway through the film, the jury came to the conclusion that nobody who’d take the time to save a cute little kitty could possibly carve up his ex-wife.

He saved a kitten! We be acquittin’!

Far-fetched, you say? Well, look at all those idiots (and they are legion) who refuse to even entertain the notion that Michael Jackson was guilty of child molestation, simply because he was so talented and wrote sensitive songs. Case-in-point...a few years ago, after discovering a fun website that allows you to make your own ’demotivational posters’, I made one which poked fun at Michael Jackson (yes, after he was dead). I got a lot of angry replies, including one which read:

Can any of you prove that Michael Jackson was a child molester, do you just take the perspective that the media sells to you, instead of thinking for yourself. Watch "This is It", listen to some of his songs, someone like that could NEVER be a child molester...He loved more than anything...he was a philanthropist if there ever was one...


By the way, the punctuation and sentencing errors above are those of the individual who wrote the reply, not mine. Anyway, this genius is convinced of the man’s innocence and offering his music as evidence. Even more amusing is the fact my demotivational poster never even mentioned Jackson’s child molestation charges - it was a jab at those who claim to be lifelong fans only after he died - yet this person immediately jumped to Jackson’s post-mortem defense. Apparently, so did the jurors in the Jackson case, who acquitted him of any wrongdoing, even though Jackson himself openly admitted seeing nothing wrong with sharing a bed with children.

So is it really that much of a stretch to speculate 12 O.J. jurors coming up with a similarly-asinine verdict, despite the mountain of evidence against him? Such a verdict certainly wasn’t based on his prowess on the gridiron or his amusing roles in The Naked Gun films. It was only in The Towering Inferno that O.J. displayed any kind of heartfelt sensitivity on par with Michael Jackson’s music.

You may argue my comparison is not valid. To that, I offer this scenario: the career of Tom Hanks. For all we know, the man is a total prick...wife beater, misogynist, on-the-set prima donna, killer of puppies. Hell, he might be one step away from going postal on everyone. But he is always a nice guy onscreen, so we automatically assume Hanks the actor and Hanks the man are one in the same. But none of us know him personally. Most of us have based our perception of Hanks on his ‘nice guy’ roles. Even in the movies where he’s sort-of a villain (Catch Me if You Can, That Thing You Do), we still like him. But let me ask you this...if Hanks was suddenly accused of beating his wife, raping his dog (or the other way around) and jumping into his car to mow down every pedestrian he sees, wouldn’t we be so shocked that a fraction of us would refuse to believe the allegations against him, based solely on his public persona? And who’s to say that that a good number of that fraction couldn’t be assembled for jury duty in the Hanks case? Surely Woody or Forrest Gump would never go on a killing spree, therefore Tom Hanks couldn’t, either. That’s the same alarmingly effective argument Michael Jackson zealots use to defend their former King of Pop.

The one big difference is that we all had a few sneak previews of Michael Jackson‘s weird-ass behavior prior to his trial (buying Elephant Man bones, sleeping in an oxygenated booth, dangling his own kids over balconies). The whole O.J. thing came out of the blue. One day he’s a former football hero, the next day he’s puttering down the freeway in his white Bronco with the entire L.A. police force on his tail. He’s known today to a whole new generation as the guy who got away with murder. Back then, we were still trying to grasp the inconceivable notion that an All-American hero was capable of knifing his wife.

So who’s to say the jurors in the O.J. trail weren’t unduly influenced by his charming role in The Towering Inferno and his kitty rescue? If dumber-than-average moviegoers converge in a single jury room, then there’s no way O.J. could have killed his wife and boyfriend.

We all watched the car chase, the trial, the verdict. How else can you explain him getting away with murder?

But O.J. is only one of 17,000 stars to make an appearance in The Towering Inferno, in which the world’s tallest skyscraper (looking like a giant middle finger on the San Francisco skyline) catches ablaze, trapping hundreds of people on the top floor. It’s the undisputed mother of all disaster films, and one of the few that's truly a classic. The Towering Inferno has it all: fire, explosions, destruction, a billion subplots, a dopey song interlude, that kid from The Brady Bunch, and plenty o’ death (death by falling, death by drowning, death by explosion, death by helicopter, death by blunt objects, and of course, lots of death by combustion), all wrapped up in a cozy 165 minutes that feels more like 90. Sure, The Towering Inferno trucks out every disaster cliche in the book, but it’s executed so well that we easily forgive the cardboard characters, the goofy dialogue (as when Faye Dunaway compares sex with Paul Newman to a cheeseburger), and the ridiculous climax. None of that matters; the movie’s too damned fun, and I defy you to find anyone whose seen it that didn’t have a good time (by “anyone”, I mean anyone normal). Of course the film is stupid, but so manipulative that you can’t help but go along with it, much like I’m sure the O.J. jurors were swayed by his act of feline humanity, even while people throughout the building were being broiled alive.

The Towering Inferno was the last truly great disaster movie made in the 70s (and the last good movie producer Irwin Allen would be associated with), mainly because I think everyone involved in its production had no pretenses about what they were making...big, grand, no-brain entertainment, the kind of bloated, star-driven melodrama that really wasn’t being made at the time. Brainless movies today are the norm, but back then, with a lot of self-important young directors calling themselves artists, such a movie was indeed a rarity. It was also one of the last movies made where the studio wasn’t embarrassed to admit how much they spent (Hell, the voice-over in the theatrical trailers bragged about it). There’s no attempt to challenge the intellect here, nor are there any star-making breakthrough performances to boast about. The movie itself is the star, even though it features a cast of Hollywood big-guns (such as Paul Newman, Faye Dunaway and Steve McQueen, who does what he does best, which is be Steve McQueen).

I’m sure the producers were as surprised as the rest of the world when The Towering Inferno was nominated for 8 Oscars, including Best Picture. Considering its competition (The Godfather Part II, Chinatown, Lenny and The Conversation), the idea that it had a chance of winning seems laughable. But let me ask you this...how many of those nominated films would you actually want to watch a second or third time? Chinatown was confusing, Lenny was depressing, The Conversation was downright boring, and anyone telling you different is either lying or they haven’t actually sat and watched them lately. That leaves Godfather II (which deservedly won) and The Towering Inferno, the only two nominated films in 1974 I'd want to sit through a second time. To me, that’s the definition of a great movie.