MARCH OF THE PENGUINS: It's A Bird's Life...And It Sucks 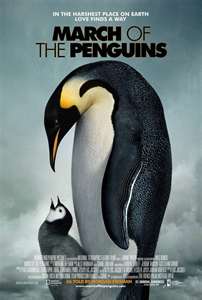 March of the Penguins is, so far, the only “documentary” I ever paid to watch in a theater. Not by choice, mind you. Like most theatrically-released docs, it started off in art houses, but once word got out that penguins were the new black, and my oldest daughter (10 at the time) saw the trailer, guess who got the privilege of taking her to the movies to bask in their cuteness?

Growing up, I was never a big fan of documentaries. The last thing I wanted in cinematic entertainment was the feeling I should be learning something. They reminded me of being back in school, when my burned-out social studies teacher would show a dry, 60 minute video of the Civil War in lieu of actual instruction. Not to date myself, but these snoozers weren’t even videos as we know them now. They were actual film reels shown with a clickity-clackity projector, lovingly spooled by the clichéd, nerdy AV-savvy student who once existed in every class, later rendered extinct once technology became so idiot proof that even my grandmother learned how to pop in a DVD after 17 hours of instruction by yours truly.

Not every school-sanctioned documentary was a dull montage of grainy black & white war photos. I kind of enjoyed the nature documentaries my biology teacher used to show, especially those which showed animals humping. Or maybe I more-enjoyed my teacher's reaction when the entire class would erupt with laughter once two species started going at it. On a few occasions, he’d stop the film and berate our immaturity. But what did he expect? Humping is funny, especially animal humping. With hindsight, it’s obvious that even the producers of these educational films knew the value of on-screen sex as an attention-getter. We laugh, we go ‘eeew’…but at least we’re watching. There’s a bit of on-screen bumping-of-uglies in March of the Penguins, too.

Like I said, not all documentaries are boring exercises in education. Nature documentaries, in particular, hold a special fascination with most people, and not just because they provide the opportunity for us to watch them do the nasty (that’s just a bonus, like getting to check-out Angelina Jolie’s boobs in an otherwise violent action movie). No, we love animals because they are different. Whether these critters are overwhelmingly cute or disgustingly fascinating, the one thing we do actually learn from these films is that animals have a harder time getting through life than we do. I mean, how would you like waking up each day knowing there's a good chance you could be eaten on the way to work?

Based on what we see in March of the Penguins, there’s no species on the planet whose life is shittier than those little birds waddling around Antarctica.

A lot of modern nature documentaries (at least those made by directors who actually want their films to make money) aren’t really documentaries in the purest sense, and may have taken a cue from Walt Disney in order to boost the drama. Remember those old Disney's True Life Adventures, the ones which amusingly depict the life and death struggles of various species, all set to a comedic music soundtrack and jovial voice-over by narrator Winston Hibler? Turns out most of those weren't true documentaries either, with some of the scenes staged by the filmmakers.

Think about it, the only way they could have captured a hapless raccoon rolling down a mountainside while stuck inside a log is if they shoved the poor critter in there and kicked it down the hill. In fact, it was later discovered by the Canadian Broadcasting Corporation that, for the film, White Wilderness, the scene showing hundreds of lemmings leaping off a cliff to their deaths was actually set-up in advance, using a rotating platform installed by the crew. Like those old True-Life Adventures, many modern nature docs are loaded with drama, at least until you think about what the filmmakers did to get some of those shots. What, you thought the makers of Winged Migration didn't place that nest of helpless chicks in the path of an approaching combine?

There isn't any obvious filmmaker manipulation in March of the Penguins, but at the same time, you've got to question their agenda in documenting the slow deaths of such cute little birds. Sure, that's just nature in action, which is fine...but don't spend all that time getting me emotionally attached to them!

Nature is the perfect fodder for movie drama. With a bit of manipulation from the film crew, a heart-wrenching scene in a nature documentary is as emotionally riveting as Kevin Costner playing catch with his dad in Field of Dreams, at a fraction of the cost.

Even in nature docs, giving the viewer a lot visual spectacle is more important than providing any actual info, like those shows on the History Channel, which use CGI to depict various spectacular ways our world could come to a violent end. If you do not know what I’m talking about, just check out the History Channel’s programming schedule on any given day. Odds are there will be at least one program dedicated to impending Armageddon, either by asteroids, global warming or biblical prophecy (maybe it should be called the We're History Channel). March of the Penguins provides such spectacle. We may not see them scorched by a rogue asteroid (that would be uber-sad), but the numerous panoramic shots of these critters waddling across the open Antarctic landscape is as stirring as Moses leading the Hebrews over open desert.

March of the Penguins is a French film in the tradition of Microcosmos and Winged Migration: awesomely cool to look at, even if we don’t really learn that much (except that the snail-on-snail action in Microcosmos will put you off your lunch). But unlike those, this one didn’t actually start off as a documentary. The original French cut was sort of a love story with actors providing the voices for the penguins. It wasn’t until March of the Penguins was altered for U.S. release that all the dialogue was replaced by narration from Morgan Freeman (whose authoritative voice could make Rambo look like an accurate depiction of post-war syndrome). At any rate, the actual facts presented about the subjects of these aforementioned French films take a backseat to showing a lot of cool things to look at. March of the Penguins offers only one cool thing, but it's a really cool one thing, like the knock-knock joke a four-year-old learns and thinks is the height of hilarity even after telling it for the umpteenth time. The film features penguins, thousands of them, and most of the running time is dedicated to showing these birds engaged in the single activity that makes them so endearing…

Waddling miles and miles across a bleak white Antarctic landscape in order to mate or feed or whatever. And it’s cute as hell, at least until some of them start dropping dead from the cold, or others finally finding a break in the ice so they can dive into the water in search of food, only to get eaten by a walrus or whale. And yes, babies die, too. But, like your four-year-old repeatedly telling you the same knock-knock joke, watching penguins endlessly waddle can get old after awhile, so these asides of horrible death actually provide a break for the viewer.

And sure, we say, “aaaw, poor little penguin,” but something else gnaws at us while we're watching, something we don’t want to think about in relation to one of the most adorable species on Earth…

…what a dumb fucking animal.

This movie establishes early on that, for most of the year, Antarctica is so goddamn cold that even the penguins can barely stand it. Sure, they can’t fly to a warmer climate, but they sure as hell can swim. We know this because March of the Penguins provides ample footage of these birds gracefully cutting through the ocean depths like fighter planes breaking the speed of sound. Yet it doesn’t occur to a single one of them that they don’t have to tolerate the living hell God saw fit to place them in. They choose to.

So, in actuality, March of the Penguins does offer some facts we may not have known about the species before:

1) Being a penguin sucks.

3) My own problems suddenly don’t seem so bad, even the ones that are my fault.

Still, I over-analyzed the hell out of this movie while my daughter and I watched the events unfold. Being 10, she bought into the drama and plight of the penguins, shedding a tear or two when a penguin froze or starved. All I could think about was, if I am ever reincarnated as a penguin, then I must have really, really wronged someone in my previous life.
Posted by D.M. Anderson at 5:41 PM