THE GRUDGE: How To End A Career Before It Begins 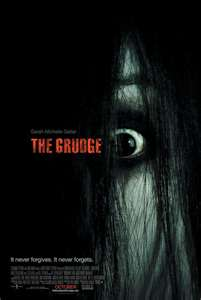 The Grudge provided positive proof that just because you have a college education doesn’t mean you are smart.

I’m a middle school teacher in the real world, and like any job, sometimes it's necessary to take a day off for an appointment, running my kids to the dentist or having the house to myself so I can crank-up some Metallica and play air-guitar in my underwear. But unlike most jobs, a teacher’s duties do not stop because you need a day off, so we must arrange for a sub to come and fill-in.

Seems simple enough, right? But it isn’t as easy as that. You have hire the sub yourself through an automated online system, prepare detailed lesson plans in advance and pray your students go easy on whoever shows up; it is amazing how many middle school kids think sub days give them permission to act like shitstains without fear of repercussion. One thing I can’t stand is the attitude that subs aren’t real teachers. They are, and almost all of them begin their career by subbing until they can secure themselves a permanent position. It’s hard work, and not always financially secure; unless it is a long-term gig, you don’t really know from one day to the next how often you’ll be working. Kids do not have the right to make the job harder, but they often do anyway.

On the other hand, while it’s unfair to be subjected to rotten behavior from children, a lot of subs tend to encourage such errant behavior themselves.

Not to belittle the job, but substitute teaching is essentially glorified babysitting. You are required to follow established lesson plans, remind students of their tasks and make sure they follow through. Seldom is actual teaching involved. Most of the time, the subs I’ve hired do that job well.

But every now and then, I’ve gotten some subs who have no business being in a classroom. Some have come in and totally ignored my lesson plans and taught their own (even if totally unrelated to whatever unit we were in the middle of), some have used the period to establish themselves as one of the ‘cool’ teachers who lets kids do what they want, some have come in with an agenda totally unrelated to public education at all (such as one genius who came in and lectured why we should all be more tolerant of transgender individuals).

Then there are those whose very appearance guarantees little will be accomplished. I once had a sub so androgynous that even my colleagues had no idea if the individual was a he or she. Another young lady showed up dressed in a mini-skirt, high-heels and fishnet leggings, boobs threatening to burst from her blouse. Another sandled hipster decided it was perfectly okay to sit at my desk, prop his feet up and cut his toenails. Remember, this is a classroom of 12 and 13 year olds, who are a lot like the elderly...anything which deviates from the norm throws their world into turmoil.

Most of the aforementioned substitutes were young and fresh-out-of-college, with little or no experience even being around middle-schoolers, much less knowing how they think. Unless you are LeBron James or Lady GaGa, they do not think any adults are cool. If you are an educator, no matter how you act, what you let them get away with or how sexy you dress, they do not want to be your buddy.

But that didn’t stop one sub from doing the dumbest thing I’d ever seen an educator do in my classroom. Not only did she have a misguided sense of mutual trust with my class, she pretty-much screwed herself out of ever teaching in the Portland metropolitan area. After arranging a day off to release my inner James Hetfield, our sub-finding system selected this young woman, who’d just recently graduated from Portland State University. My lesson plans were simple: As a reward for completion of a previously-assigned Narrative Writing Assessment, I planned to show The Sandlot, a fine little family film which featured narrative similar to the work they had just finished. All the sub had to do was push play and call it a day.

But, no, this particular teacher was one of those under the misguided impression that her job was to establish how hip she was. When several kids groaned at the idea of sitting through a family film like The Sandlot, she apparently asked the class what they’d rather do. One of my students responded by saying he had a DVD of The Grudge in his locker.

The Grudge is an American remake of a popular Japanese horror film. Starting with The Ring, there was a brief-but-huge trend of adapting Japanese ghost stories for American audiences. The Ring remains the only truly good one, but The Grudge was pretty successful, spawning two sequels. Personally, I thought the movie was derivative and boring, but it was extremely popular with teenagers. Although rated PG-13 in theaters, it was released on DVD in an unrated version, which is what my student had in his locker.

My sub apparently agreed to let the class watch The Grudge instead, as long as everyone promised to keep it a secret. As rationally-thinking beings, I’ll bet you just came up with two immediate reasons why this was a stupid idea...

First, teaching is one profession that's under constant scrutiny by the public in general. The slightest slip-up in the classroom can result in angry parents screaming for your head. Of course I know that most of the kids in my class grow up being allowed to watch stuff like Saw or The Hangover. At the same time, however, I’ve previously been forced to change the name of one of my independent reading units, “Stories of Mystery and Fear,” to the less-threatening “Weird Tales,” simply because a few conservative and religious parents objected. You also need to remember that, as a middle school teacher, I am not allowed to show any movie with a rating beyond PG without first clearing it with both the school’s administrators and every single parent whose kids are in my classroom.

Second, and even stupider, this supposedly-intelligent substitute teacher actually trusted a classroom of 30 kids to keep this a secret. Did she just land on Earth from Planet Stupidia? When I returned to school the next day, standing in the hall before class started, what do you think was the first thing at-least a dozen students said when they saw me?

13-year-old kids don’t give a shit about honoring the trust of some grown-up they just met, no matter how cool they may be.

During the course of the day, both me and my principal were inundated with angry phone calls from parents, understandably upset that a teacher would subject their kids to such horrors without being given permission. Don’t get me wrong, I’m not some conservative fuddy-duddy; I often sit with my eight-year-old daughter to view all kinds of cinematic horror. But watching those films with my own kid was my decision, based on what I knew she was ready for. I still wouldn’t want her school to make the same decision without checking with me first.

But my substitute, in an effort to be the so-called ‘cool teacher’, ignored all that and stupidly assumed every one of the students was hip to her plan.

Well, I doubt it was worth it, because after this incident she was removed from the sub lists of at least four school districts in the Portland area, which in-turn precluded her from being seriously considered for any kind of permanent teaching position.

I do not know whether or not my former sub is permanently employed right now, but I do know that spending six years in college and tens-of-thousands of dollars to earn a degree doesn’t automatically make one smarter. This lady screwed herself over a freaking movie. And you know, what’s truly sad is that all this hubbub was over such a shitty movie like The Grudge. I mean, if I was going to throw away my career over a horror movie, I would have at least chosen a film more worth throwing it away over, like, Psycho or The Exorcist.
Posted by D.M. Anderson at 4:14 PM