EARTHQUAKE: Take Off Your Pantyhose, Dammit! 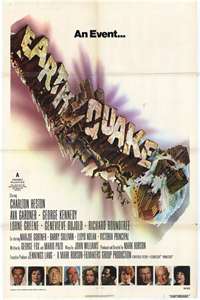 
“Sensurround” was a gimmick dreamed up in the 70s by Universal Pictures for their most successful entry in the 70s disaster movie sweepstakes, Earthquake. In theaters where the movie played, speakers the size of Volkswagens were installed in the back. During key scenes these speakers emitted a bass-heavy rumble, loud enough to (sort of) vibrate your seat as though you were experiencing the quake too, much like I used to experience my upstairs neighbor’s love of R. Kelly every weekend before I finally lost my mind and shot him. To this day, whenever I hear “I Believe I Can Fly,” I believe I can kill again.

Sensurround was one of those gimmicks that William Castle would have once concocted himself if he had the money. It ain’t some technological breakthrough - anyone with the same stereo system as my late, bullet-riddled neighbor can accomplish the same thing - but it’s an idea no one had thought of before. While today all movies are presented in Mega-Dolby-THX-5.1-Dodeccophonic-Digital-Thunder-Of-The-Gods-Christ-My-Ears-Are-Bleeding-Surround sound, back then there was only Sensurround, simply because someone thought to stick huge speakers at the back of the theater. Universal would use the gimmick for later films (Midway, Rollercoaster and Battlestar Galactica), but it was only really effective in Earthquake, when the idea was still new. That as much as anything helped make it a box office hit.

As for the movie itself, Earthquake assembles the usual all-star cast to wonder around and dig each other out of the rubble after a massive quake hits Los Angeles. Typical of most disaster movies, most of the principle actors are well past their prime, many of whom overact on an unparalleled level - you know you’re in for extreme William Shatner-style thespianism when Charleton Heston turns in one of the most low-keyed performances in the movie. George Kennedy is on-hand to pretty-much play the same guy he does in the Airport movies (this time as a hard-nosed cop); Ava Gardener is Heston’s bitter alcoholic old wife, who looks like that scary aunt in every family who reeks of cigarettes and Pond’s cold cream; Lorne Greene is cast as Gardener’s dad (!), who has either discovered the Fountain of Youth or conceived her when he was eight years old. Others along for the ride include Richard Roundtree as a motorcycle daredevil, Marjoe Gortner as an unhinged National Guardsman, Walter Matthau as the film’s comic relief, Genevieve Bujold as Heston’s mousy mistress, and Victoria Principal in her pre-Dallas days, sporting leather pants, a Get Christy Love afro and big knockers.

Of course, all these actors take a back seat to the true stars of the movie, the special effects team. There are two massive quakes during the film, and Los Angeles ends up pretty well wasted. Skyscrapers crumble, bridges collapse, a dam bursts, houses topple or explode; victims fall to their deaths, get crushed, blown up, broiled, drowned, or shot by Gortner (the film’s only real villain, and sporting a 'fro nearly as big as Victoria's). For the most part, the effects artists do a good job. Much of the destruction is pretty convincing even by modern standards, save for a few goofy scenes, such as when a cattle truck flies off of a crumbling bridge; though the truck topples a hundred feet to the ground, none of the anti-gravity cows fall out. Another scene shows passengers in a high-rise elevator falling to their deaths...we know they’ve hit the ground floor when a splotch of red paint is badly super-imposed over the shot. The traditional matte paintings showing the city in ruins may not be as convincing in this age of CGI, but I personally think they give those scenes a surreal look that's more effective than anything one of Michael Bay's current chronies can cook up with a laptop.

Earthquake at least deserves some kudos for being one of the few disaster movies with a fairly downbeat ending. A majority of the cast is dead by the time the credits roll, and the few who survive aren’t embracing each other, simply happy to be alive and with their loved ones. They are understandably shellshocked, dazed and confused. Earthquake is also the only time you’ll ever hear Lorne Greene roar, “Take off your panty hose, dammit!”

Imagine if he had yelled that on Bonanza.