WILLY WONKA & THE CHOCOLATE FACTORY and the Karmic Inevitability 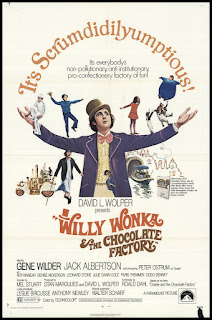 I’m prefacing with this cliche because I'm a middle school English teacher and the overall level of defiance and disrespect is a far cry from what I remember when I was that age. Not to sound like an old curmudgeon, but whenever I attempted to engage in open defiance like mouthing-off to a teacher, not only did I get a harsh reprimand at school, the ensuing official phone call home assured that even more swift justice awaited me. I quickly learned that if you're going to disrespect an authority figure, save it for the playground when they aren't around.

That hard lesson has served me well in my adult life, especially during counselor-driven trainings and workshops over the years related to developing empathy and alternative plans for dealing with various students' personal issues. I can’t begin to count the number of meetings I’ve endured where counselors and parents vomit myriad excuses for the things a particular child does to make everyone else’s life a living hell. Because I enjoy being employed, I always refrain from suggesting what some parents really need to hear: “Hey, maybe your kid’s just an asshole.” I demonstrate professionalism and restraint because that's one of life's unwritten laws.

And when I say something as superficial as “kids these days,” I’m not referring to those with actual psychological disorders or whose home lives are the perfect metaphor for a disaster movie. I truly empathize with anyone forced to suffer through such obstacles. In general, though, “kids these days” are no better or worse than they were decades ago. They’re simply provided with a lot more excuses for their behavior, by both belligerent parents and the educational institutions who live in fear of being sued by them (and don’t think for a second some kids aren’t aware of this and manipulate the system to their advantage).

At my school, the worst kids are often given the biggest breaks regarding discipline and consequences because of their so-called ‘issues’. Many eloquent reasons are offered for their behavior, none which actually hold the kid responsible. In other words, selected students can tell me to fuck off right in the middle of class and be back the next day as if nothing happened, such as one boy did when I asked him to pull up his pants because sagging is a violation of the dress code.

Personally, I have no problem with sagging. While I think it’s an aesthetically hilarious fashion choice, if you want to spend your extracurricular time waddling around like a constipated penguin, be my guest. But I also have one foot in the real world, where doing your fucking job as instructed is reasonable expectation. As much as I’d like to show up for work wearing nothing but hip-waders and a Speedo so the world can behold the iron-boobed dragon-lady tattooed on my back, simply telling my boss to fuck off doesn’t suddenly give me permission to do so.

We’re not doing these kids any favors by coddling them because that ain’t how the real world works, which, as educators, we are allegedly preparing them for. All that touchy-feely shit ceases the second they turn 18. The real world doesn’t give a damn about anyone’s personal issues, fashion preferences or declarations of “how they roll.” Unless you’re Justin Bieber, consequences come swift and harsh, and if you aren't prepared for them, they're like a societal sucker-punch. Worse yet, the real world doesn’t stop (or even slow down) long enough to make sure you get the message.


The perennial classic, Willy Wonka & the Chocolate Factory, is arguably the greatest cinematic microcosm of that societal sucker-punch. Unless you’ve been living under a rock for the past five decades, you know it’s nearly as revered as The Wizard of Oz. And like that film, Willy Wonka never found a real audience until it began popping up on TV and home video (or in my case, its annual inclusion in the summer matinee movie series at the local Cinema V). You’d be hard-pressed to meet anyone over 20 who hasn’t seen it at-least once. It even remains relevant on the internet through countless memes using Gene Wilder’s condescending smile to point out the various stupidities in the world. Not bad for a movie cynically produced with the initial purpose of selling candy bars (and the author of the original book, Roald Dahl, absolutely hated it).

Despite its humble product-placement beginnings, kid-friendly story, sunny production design and plethora of bouncy songs, Willy Wonka & the Chocolate Factory is a dark, sinister film with one clear message: Don’t be an asshole. Sure, most family films offer a variety of morals or lessons we experience vicariously through its main characters, and once they learn what’s truly important in life, everyone lives happily ever after. But really, isn’t ‘Don’t be an asshole’ the only life-lesson anyone needs? If God himself had handed down that single message for Moses to bestow upon the Hebrews, wouldn't that pretty-much cover every fucking commandment?

With the exception of Charlie Batch (ironically the dullest character in the film), all the other children are self-centered, unlikable little bastards who have never been held accountable for their behavior until touring Wonka’s chocolate factory. One by one, these kids get the unexpected Karmic retribution they deserve. Not only that, the audience is never reassured they even survive. And like life, the chocolate factory tour moves on...with or without their participation.

If the film is indeed more about Karma than candy bars, then Willy Wonka himself (Gene Wilder at his best) is its confectionary Buddha...always omnipresent, yet wise enough to stand aside and let these people shit in their own nest.

That’s how real life works. It doesn’t coddle you, render you a special snowflake or catch you when you fall. When you’re tossed out into the world, there are no lectures, no excuses, no empathy and no bleeding hearts who got-your-back because you’re not-yet ready to grow up and stop being a dick. I’m convinced the kid who told me to fuck off in class would last two seconds in Wonka's chocolate factory before the more streetwise Oompa-Loompas pinned him down to shove a few Everlasting Gobstoppers up his ass.

So kids these days would be doing themselves a big favor by taking-to-heart the Karmic inevitability present in Willy Wonka & the Chocolate Factory, a film with a singular life-lesson for the ages:

Don't be an asshole.