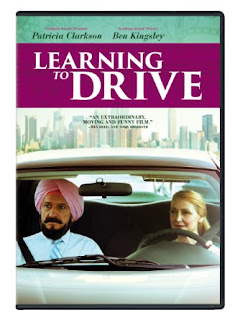 Learning to Drive is a deliberately-paced, semi-comedic character study driven (no pun intended) by its performances.

Patricia Clarkson is Wendy, a literary critic whose husband of over 20 years leaves her. Though always more obsessed with her own career than family (including her daughter), Wendy isn't used to being completely independent. She doesn't even know how to drive. Then she meets Darwan (Ben Kingsley), an Indian driving instructor/cab driver who doesn't seem particularly happy either, especially with an impending arranged marriage on the horizon. After Wendy reluctantly hires his services as an instructor, the two develop an odd little friendship in which each draws on their own personal experiences to help the other emotionally cope with the sudden changes in their lives.

This is a charming, undemanding (occasionally hilarious) little film which takes its time letting us get to know these two characters. We enjoy being around these people, and the story, while slight and slow to unfold, at least doesn't take the predictable route we're briefly led to assume will happen.


The performances alone make Learning to Drive worth watching. Clarkson and Kingsley are solid as usual, instilling their characters with the appropriate amounts of likeability and stubbornness to make us empathize with them (though by now, playing yet-another Indian, Kingsley could have phoned this one in and we wouldn't notice). The film isn't likely to resonate much afterwards, but it's an entertaining enough way to spend 90 minutes.

On a side note, the music score (which is quite effective, by the way) is by Paul Kicks and Dhani Harrison, the latter being George Harrison's son.