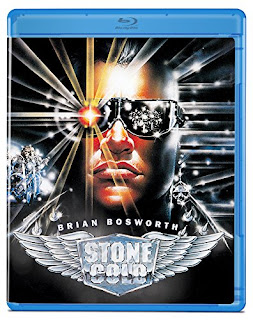 Once again, Olive Films unearths another relic you forgot existed. I love that about them.

Some of you might remember The Boz, that arrogant, trash-talking linebacker with the wild haircut who was a superstar at the University of Oklahoma, later humbled when his pro football career pretty much went nowhere. As his 15 minutes of fame were quickly ticking away, Brian Bosworth tried his hand at being an action hero in 1991's Stone Cold, which bombed even worse than his tenure with the Seattle Seahawks.

In some respects, one can see why. Unlike, say, Jim Brown (or even O.J. back in the day), Bosworth's carefully cultivated bad boy image was never especially likable. Sticking him in a big brainless action film felt like a desperate attempt to keep an NFL washout in the limelight (kind-of like Dancing with the Stars does today).

Other than that, Stone Cold isn't really any worse than the stuff Stallone was churning out at the time. Boz plays Joe Huff, a renegade cop (of course) blackmailed by the FBI to infiltrate a violent motorcycle gang known as The Brotherhood. Its psychotic leader, Chains Cooper (Lance Henrikson), has drug dealings with the mafia and also plans to assassinate a local district attorney. Needless to say, lots of fights, gunplay and motorporn ensues.


Boz looks and dresses like the lead singer of an 80s metal band with the worst mullet in movie history. As for his acting...Bosworth is essentially playing himself, and not much is required of him aside from fighting, scowling and handling his lizard (his PET lizard, you perverts). As such, he delivers a one-note performance without embarrassing himself too much. Henrikson is the polar opposite, chewing the scenery like a pitbull. He clearly appears to be enjoying himself, perhaps aware of how ridiculous everything is.

And ridiculous is definitely the one word which best sums-up Stone Cold, from the story, the dialogue, the characters, the costumes...right down to the action scenes, which grow increasingly ludicrous. But while not a good movie by any stretch, Stone Cold is a lot of disreputable fun if you're in the right frame of mind, much like Stallone's Cobra managed to entertain in spite of its utter stupidity...or perhaps because of it.

Similar to Bosworth's football career, Stone Cold warrants little more than a footnote in the annals of action movies. Yet at the same time, they don't really make stuff like this anymore, and there's some morbid fascination to be found in watching such an elaborate attempt to turn a has-been into a movie star. At the very least, whether you're nostalgic or in the mood for some unintentional humor, Stone Cold is seldom boring.

NOT BAD...AT LEAST BO JACKSON AIN'T AROUND TO HUMILIATE THE BOZ THIS TIME.