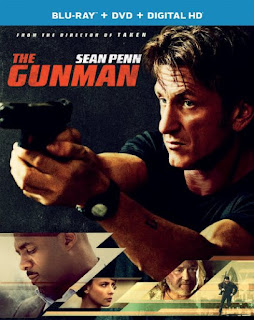 Early in The Gunman, we see main character Jim Terrier (Sean Penn) surfing off the African coast. The first thing that popped into my head was, "After all these years...Spicoli finally found the perfect wave!" I don't know if this throwaway scene was intended to reference Penn's iconic, starmaking role in Fast Times at Ridgemont High, but I'd like to think so. After all, despite a decades-long career of bucking the mainstream and taking on challenging roles, there are those of a certain age who will always most-fondly recall him as the likeable, long-haired high school stoner of days past.

How time flies. Now here he is, part of the old guard, joining the likes of Liam Neeson and Kevin Costner as a middle aged action hero in The Gunman. It isn't quite as much dumb fun as Taken - helmed by the same director (Pierre Morel) - but it's still cool to see a traditionally 'serious' actor kicking ass and blowing shit up. Here he plays a government assassin whose last job (killing a prominent figure in the Congo) requires him to disappear, leaving behind the woman he loves, Annie (Jasmine Trinica). Eight years later, everyone on his team involved in the assassination are being killed off, prompting Terrier to resurface in order to confront those who might be responsible, including former friend Felix (Javier Bardem), who has since married Annie.


Considering his resume and formidable acting abilities, seeing Penn in such a standard action film is somewhat surprising (maybe even disheartening to some). Still, he brings his usual intensity to the role, which helps us overlook the fact the story itself is rather generic and perfunctory. As Felix, Javier Bardem delivers his usual A-game to a relatively thankless role that doesn’t figure too much into the plot. But despite the impressive cast and murky plot, what ultimately matters is the action, which The Gunman mostly delivers. While not as rousing & kinetic as any single scene in Taken (which benefits from a less complicated story), Penn is a suitably-scowling badass, even when displaying vulnerability.

It’s unlikely Sean Penn will follow Liam Neeson’s latter-day career of geriatric ass-kicking, but The Gunman, while no classic, is a nice change-of-pace from his plethora of serious roles. Despite a lackluster performance at the box office, it’s an entertaining action film worth checking out and deserving of a second life on home video. Plus, we finally get to see him surf.