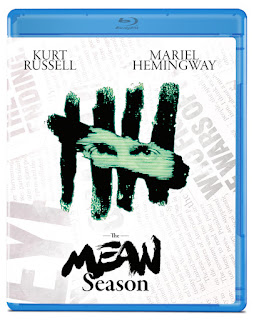 When you think about it, Kurt Russell has had quite the unusual career. One of the few child stars to make the successful transition to adult roles, he became a cult icon with films like Escape from New York and The Thing, garnered critical praise in supporting roles like Silkwood and has proven to be a penultimate character actor by virtually disappearing into roles in such semi-classics as Miracle and Death Proof. Everyone knows who he is, yet for a respected career that has spanned over 50 years, Russell never joined Hollywood's A-list: bankable actors whose name alone would sell tickets.

Still, he starred in a lot of midrange dramas, comedies and thrillers during his most prolific years (the 80s and 90s), one of which was 1985's The Mean Season. This is the kind of traditional cat & mouse thriller that, in the 70s, would have starred Gene Hackman. Russell plays Malcolm Anderson, a weary Miami newspaper reporter on the verge of burning out due to all the terrible crimes he's covered. He wants nothing more than to get away from Miami with his longtime girlfriend (Mariel Hemingway), but gets drawn into the biggest story of his life when a serial killer singles Malcolm out as the one man to write about his exploits for the public. Though the killer craves media attention, it's Malcolm who becomes a minor celebrity, torn between helping the police catch the killer and enjoying all the sudden attention he's getting.


That supremely-intriguing theme is frequently touched upon, but seldom explored in any real depth. For the most part, The Mean Season is content to be a fairly predictable by-the-numbers thriller, with Anderson rendered a hapless pawn who mostly exists to react to every plot turn (though Russell is solid as usual). The overall story is interesting enough to keep our attention, but pulls too many punches to instill the same morbid fascination provided by later films like Seven and The Silence of the Lambs. The cast is impressive though, which includes early turns by Andy Garcia and Joe Pantoliano. Also noteworthy is the criminally-underrated Richard Jordan as the killer, given a rare chance to pull out all the stops to create a suitably unhinged character.

Like a lot of Russell's output in the 80s and 90s, The Mean Season isn't especially memorable, but entertaining enough in the moment, with good performances and a decent story. Still, one might wish the intriguing themes suggested early-on would have been explored in more detail.