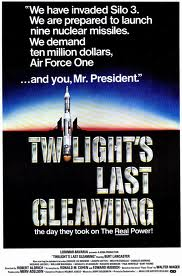 This was a milestone day for me. I finally got a copy of 1977's Twilight's Last Gleaming on Blu-Ray. Okay, so it ain’t like I conquered Mt. Everest, but I’ve been looking to own this goddamn thing for years. This is a big deal because now I finally own every single movie I ever loved growing up (just in time for DVDs and Blu-Rays to go the way of the Dodo...oh, the irony). From here on out, all that's left for me to collect is new stuff that happens to be worth watching more than once...which occurs less and less as I get older.

Right now, I know a lot of you are saying, "What the hell is Twilight's Last Gleaming?" I know because when I learned it was finally available on disc, I sped over to Best Buy and asked one of their resident geniuses if it was in stock. Unfortunately, she appeared stunned there was something with twilight in the title that wasn’t about Edward and Bella. I probably should have realized that before I wasted the gas to go there; Best Buy - and most other stores, for that matter - is pretty worthless these days to any die-hard movie fan. For the most part, unless a movie is universally considered a classic, if you‘re looking for anything more than twenty years old, you’re shit out of luck.

Like a lot of movies I loved growing up, Twilight's Last Gleaming is one of those obscure, forgotten relics few people have ever heard of, and even fewer have actually seen. Burt Lancaster plays disgraced (and slightly unhinged) Air Force officer Lawrence Dell, who, along with two thugs, escape from a military prison, infiltrate a missile silo and take control of its arsenal. Then Dell threatens to launch its missiles at the Soviet Union unless the powers-that-be in Washington make-public the real reason the U.S. continued to wage war in Vietnam long after it was declared unwinnable. Dell also wants a hostage - the President of the United States - to ensure his demands are met. The movie's premise is somewhat outrageous (one prays taking over a missile complex isn't quite this easy), but it's a conspiracy-theorist's wet dream, and that's part of what makes it fun. It's the kind of paranoid movie that could only have been made in the 70s, post-Watergate, when our overall faith in the government was at an all-time low. We start off thinking Dell is the film's villain, but by the end, it's the White House advisors surrounding the president (most of whom would rather see their Commander-in-Chief die than reveal their secrets) we grow to despise. What's kind of ironic about this one, considering our tendency to use presidents as de facto symbols of everything wrong or right about certain eras, is that this president (played by Charles Durning, who is terrific) is probably the second-most sympathetic character. In the end, he actually begins to feel empathy for Dell, and is painfully aware he can no longer trust those around him.

Even for a conspiracy thriller, this is dark stuff. By the final reel, the viewer is pretty certain things will not end well...and they don't. This movie definitely has a sobering anti-government agenda that wasn't prevalent in the novel it’s loosely based on (Walter Wager’s Viper Three), which was totally lost on me as a kid, when I first watched it on HBO a couple of years later. It must have been lost on a lot of people, because Twilight's Last Gleaming sorta came-and-went in theaters back in '77, when interests turned to more light-hearted fare like Star Wars and Smokey and the Bandit. With Luke Skywalker saving the Rebellion from the clutches of the galactic empire, or Burt Reynolds making sure a truckload of illegal beer makes it to its destination, who the hell wanted to be reminded of the horror that was Vietnam, much-less an awful theory why the war was so painfully dragged out? 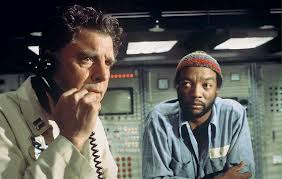 Again, any agenda the movie had was lost on me at the time. I simply loved it because there was a possibility the world could end, and back then, when the threat of nuclear annihilation was one of the more realistic doomsday scenarios scaring the shit out of people, Twilight’s Last Gleaming was especially fascinating.

The movie stuck with me for a long time, but apparently few others. Over the years, despite its big cast of well-known actors, it became a forgotten relic from another era. Hell, it even stopped showing up on cable after awhile, and when such stores as Suncoast began popping up in malls across the country, seemingly teaming with VHS tapes of every movie ever made, Twilight’s Last Gleaming was never among them. Sure, you could special-order it...for ninety bucks. I’m sorry, there’s never been a single movie worth paying ninety bucks of my hard-earned cash for.

But my parents’ hard-earned cash? Well, that was different, so I put it on my Christmas list, not realistically thinking they’d actually buy it for me. So imagine my surprise when they did. My God, I was ecstatic, and to this day, I think it was one of my all-time favorite Christmas surprises. I treasured that thing, the shining beacon in my VHS collection. That is, until my VCR ate the tape a few months later. Of all the shit in my collection, that fucking machine chose to dine on the one tape I couldn’t replace! Why the hell couldn’t it have munched on the Sister Act video my grandmother thought to buy me that same Christmas?

Over the years, I eventually managed to acquire DVDs of most of the movies I grew up on, even the more obscure titles. All except one, which wasn‘t available anywhere...not even online (unless I wanted one imported from Portugal, where it was titled O Ultimo Brilho No Crepuscolo). Some guy  did manage to post Twilight’s Last Gleaming in its entirety on YouTube last year (bless his copyright-infringing heart), and I was able to watch it once before it was removed. But the picture was terrible and sitting in my office watching it on my tiny computer screen isn’t the same as owning it.

Then it was officially released on disc a couple of weeks ago. I usually know the street dates for most movies I'm interested in well in advance. This time I had no idea. I simply had stopped looking for it, and the assholes at Best Buy or Target sure as hell didn’t have it on their shelves. I only found out because I was Googling for Twilight’s Last Gleaming pictures to use for one of these blog entries, where ironically, I was going to piss and moan about the movie’s unavailability.

And the stars must have aligned themselves that night, because I had also just purchased my first HD Blu-Ray player the day before. I know Blu-Ray was a big deal a few years ago, and the picture quality was awesome, and people like me were supposed to develop big red boners for it, but being able to see Kevin Costner’s pockmarks didn’t seem worth the expense. The only reason I broke down and bought one the other day is because my old DVD player finally crapped out. Anyway, what better way to break in my new toy than popping in a movie I’d been waiting to own for 30 years?

Of course, I had to order it from Amazon, and wait at the mailbox for two whole days before it arrived, but the clouds parted and the angels sang when I ripped open the package and beheld its wonderfully cheesy cover. Twilight’s Last Gleaming is finally mine...all mine.

All is now right with the world, even if someone like General Dell blows it up tomorrow.
Posted by D.M. Anderson at 9:49 PM