JACKASS THE MOVIE: Another Modest Proposal 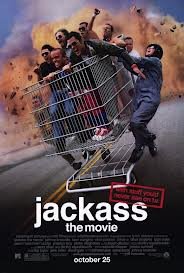 I would not presume to waste time discussing the artistic merits of Jackass, even though this movie (if you can even call it that) made me laugh harder than any other in recent memory. It also has the dubious distinction of being the only movie ever that made me physically gag, and I'm not easily sickened by what I see on screen. So no, the last thing Jackass would ever be mistaken for is art.

I will, however, waste time discussing its social merits, and why Jackass: The Movie should be considered one of the most important movies released so far this century. If we'd only take time to look beyond its visual grotesquery, the potential positive impact this film could have on our society is enormous.

Jackass, of course, started as a show on MTV, each episode consisting of little more than a bunch of guys filming themselves performing stupid, dangerous, painful and often disgusting stunts. Of course, it was a huge hit with teenagers who weren't even alive when MTV actually stood for Music Television. And of course, even though the show always began and ended with a warning that the stunts should never be attempted by viewers, many of them were attemtped, resulting in cases of severe injury or death. And of course, that made a lot of older folks angry (most notably Senator Joseph Lieberman), who clamored for MTV to take responsibility and pull it off the air. The network eventually did cancel it after less than three seasons, despite the fact it was their most popular show.

The short-sightedness of both Jackass detractors and its network's knee-jerk reaction to yank the show threatened cast a dark shadow over our entire society for decades to come.


Without all these douche bags, as a society, we could become collectively more intelligent, perhaps someday  evolving into the cerebral beings we envy in 2001: A Space Odyssey. But such a society will never happen as long as we continue to stand in the way of folks clamoring to shove a lit bottle rocket up their ass.

With the release of Jackass: The Movie (which is funnier - and nastier - than the series ever was), there may be hope for us yet. The original series may only live on in reruns, but with every new Jackass movie, we are offered an increasing variety of methods through which to cull the herd.

With a nod (and an apology) to Jonathan Swift, I humbly propose we nurture the inner-jackass in our youth. If, like Senator Lieberman claims, most young people are impressionable idiots willing to imitate whatever they see on TV, then let them. Maybe Jackass: The Movie should be federally-mandated viewing in all middle schools (roughly the age when some develop the idea that acting as painfully stupid as possible is somehow cool). Those who appear impressed by what they see in the film would then be allotted a shopping cart filled with lighters, fireworks, beer, a dangerous animal or two, mousetraps, vials of bodily fluids, skateboards and other various objects which, if they tried real hard, could fit up their asses. Let these kids legally drop out of school at age fourteen to pursue their destiny (they aren't likely to get much out of To Kill a Mockingbird during their freshman year anyway).

Everyone else would move on to high school, secure with the knowledge of being part of a brighter future, a collectively-smarter society with the capability to find a cure for AIDS, venture to other worlds, or at the very least, explain how guys like Senator Lieberman ever got elected to public office. Within just a few generations, we could be totally cleansed of that portion of the population whose last words are usually, “Hey, watch this.”

When you think of it in those terms, doesn’t it make sense for a copy of Jackass: The Movie to be in every home right now? Sure, some of us might lose a beloved child or two, but to quote a pointy-eared fellow,  much wiser than me, “The needs of the many outweigh the needs of the few.” If you think otherwise, you are being selfish and not looking out for what’s best for your species as a whole. How dare you.
Posted by D.M. Anderson at 7:58 PM