HARLEY DAVIDSON AND THE MARLBORO MAN: Who Invited These Dorks? 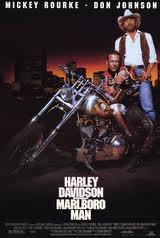 I was talking to a fellow film buff at work the other day. During our breaks, we often discuss movies we love or hate, or debate the merits of others we don't agree on. He’s put-off by the fact I hated Blade Runner, while I am stunned he didn’t like Inception.

This particular day, the subject of guilty pleasures came up, and I mentioned that awesomely bad cinema suppository, Harley Davidson and the Marlboro Man. He scoffed, which I find interesting considering his favorite John Carpenter movie is Big Trouble in Little China, and both movies are whacked-out, everything-but-the-kitchen-sink exercises in stupidity.

I guess the main difference between the two is Big Trouble is stupid on purpose, while Harley Davidson and the Marlboro Man’s isn’t. At least I don’t think it is. Still, I love this movie.

This is one of those things where you repeatedly find yourself staring slack-jawed at the screen, incredulously saying, what the hell were they thinking? It’s one of the dumbest, most blatantly-pandering and shallow movies any major studio wasted millions to make. Aside from an admittedly great title (probably created  before a word of the screenplay was written), Harley Davidson and the Marlboro Man is similar to that dorky, awkward guy we all knew in high school who tries real hard to fit in with the popular kids by speaking and dressing the part, but fails miserably because he’s actually pretty clueless.

Try to think of someone you’ve known in your life you would define as cool. What is it that makes them cool? Is it the way the look, the way they act, the way they speak? Is it the overall vibe they give off, which tells others “This is how I roll...who gives a damn if you follow me or not”? I think we’d all agree that truly cool people never feel compelled to constantly remind others how cool they’re acting.

One gets the impression that the makers of Harley Davidson and the Marlboro Man were high school dorks as well. They’ve seen other movies with cool characters, cool dialogue, a cool plot, but had no idea what made them cool. They simply thought, “bikers are cool, cowboys are cool, gunfights are cool, sexy girls are cool, our title is cool...put ’em all together and we can’t lose!”

Well, they did lose, because Harley Davidson and the Marlboro Man is so busy reminding us of how cool it is that it’s compulsively watchable because of how uncool it is...

First, there’s Mickey Rourke and Don Johnson, looking like two-fifths of the Village People. I can't help but think these two actors had a lot of say in how they looked, as if this was how they pictured themselves in real life. But back in 1991, Rourke had gone from being the coolest dude in Diner to soft-core nastiness in 9 1/2 Weeks and Wild Orchid. In those films, he looked perpetually-sweaty, probably reeked of Old Spice and enjoyed shoving cucumbers up women's asses. And in this movie, he looks like he hasn’t showered in a month.

For most of us, Johnson stopped being cool roughly 10 minutes after Miami Vice was canceled. In Johnson’s defense, although never a great actor, he does give the best performance in this movie, mainly because he’s the only one who seems aware of how fucking stupid it is. Still, these are the coolest guys the producers could get?

Second, the movie takes place in the near future for no reason whatsoever! Released in 1991, the events in Harley Davidson and the Marlboro Man take place in 1996. Aside from the inflated gas prices shown on a service station sign (which we’ve since-passed in the real world), the year is 100% irrelevant to the story. This is undoubtedly the most WTF aspect of the entire movie.

Third, nearly every bit of dialogue uttered by Harley (Rourke) or Marlboro (Johnson) consists of cliched sound-bites you might see on the bumper sticker of some douchebag’s pick-up truck (“Better to be dead and cool, than alive and uncool”) along with the prerequisite naked lady mudflaps. These guys endlessly philosophize with each other about how awesomely cool it is to be themselves, yet we get the feeling they are trying more to impress us than each other.

Fourth, even though these two guys are more-or-less shiftless bums, women repeatedly throw themselves at them because all women love guys with no discernable future, so long as they look good straddling a Harley.

Fifth is the story itself. The bar where Harley and Marlboro used to hang out is facing foreclosure. The reasonable solution? Rob an armored car, of course, which gets them into hot water with a mob of drug-dealing killers, hilariously portrayed as non-emotive, slick-haired henchmen all sporting bullet-proof trenchcoats (and standing out from the crowd like Waldo at a nudist colony). Cool, huh? But not as cool as Harley and Marlboro, who take on this army (led by Tom Sizemore) without expressing even an iota of fear...that would interfere with their wisecracks during the numerous loud, violent gunfights.


The whole movie simply reeks of superficial cool, made by people who think they know what they’re doing. One gets the impression that the very word ‘cool’ was scrawled on a banner on the wall during script development meetings...no matter what, this movie has got to be cool.

These blatantly feeble attempts to turn its two main characters into instant icons make Harley Davidson and the Marlboro Man wonderfully entertaining, but it’s simply not a movie anyone with a shred of dignity will ever fess-up and admit they enjoyed. But it is fun. What’s great about a film like this is that you can view it as a camp classic made with a nudge and wink (and there are several moments when you are convinced the movie is supposed to be a joke). Or, if you are one of those folks who take everything seriously, it’s one of the worst films of all time.

But most likely, you’ll watch incredulously, hypnotized by its ham-fisted shallowness, unable to look away...kind of like that high school dork trying to make an impression by crashing a weekend keg party he wasn’t  invited to and getting totally hammered for the first time, thinking he’s finally fitting in, when in reality he’s just making an ass of himself. Everyone else at the party is laughing at him, not with him. After he passes out, they’ll take a Sharpie and draw penises all over his face.

We get the feeling everyone involved with Harley Davidson and the Marlboro Man were trying way, way too hard to fit in. Their effort is entertaining, but not how they intended. Ultimately, they are so out-of-touch that they're the butt of the joke. If that isn’t a guilty pleasure, then I don’t know what is.
Posted by D.M. Anderson at 6:08 PM

seriously Ive watched this movie many times ^_^ I like his every move and step he took I'm the biggest fan of this movie .. I just bought Harley Davidson Biker Leather Jacket couple of days back and I'm pretty glad now :)

I really appropriate to the blog editor Thank you for this review I like it. This Mickey Rourke and Marlboro Man Leather Jacket
is looking fabulous on him, Probably one of the best films I've ever watched

Thanks to providing such a valuable blog for free. This is really helpful for me.