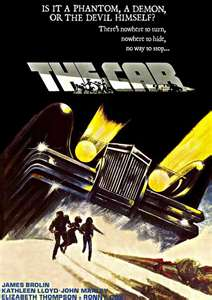 The concept of The Car, where an automobile from Hell arrives to turn the good and not-so-good folks of a small desert town into road pizza, is proof positive that Robert Evans wasn’t the only studio executive from the 70s doing too much cocaine. Crossing Duel with The Exorcist is an idea that could only be dreamed up by someone who’d just snorted half of Peru. How else can you explain why stuff like this got green-lighted, while Orson Welles was slumming as a wine spokeman on TV?

On the other hand, while Citizen Kane may be one of the greatest films ever made, nobody gets run over by a souped-up, demon-possessed automobile, which is a lot more fun to a 13-year-old (when I caught The Car at the Cinema V, the trusty old second-run theater near my house) than watching a reporter try to figure out who Rosebud is.

The Car is a terminally weird movie, even for the 70s. Maybe even the 60s. Given the deadly serious tone and numerous scenes where nothing is happening at all, one gets the feeling that the producers are actually trying to achieve something as dark and existential as The Exorcist, even though the audience is paying to watch people die.

Weirder still is the character of Amos, a despicable lout who regularly beats his wife. The audience understandably expects this guy exists in the movie just so the car can come along later and pop his body like a tick under its radials, giving us a rousing 'you got what you deserve!' moment. But no, Amos ends up not only surviving, but being one of the movie's fucking heroes (even though we're given no indication he plans to stop beating his wife).

Weirdest of all is Anton LaVey, leader of the Church of Satan and author of The Satanic Bible, who's listed as a technical advisor for the film. Really? Technical advisor? Being that the concept of Satan presented in The Car is something that a 13-year-old Grand Theft Auto addict might conjure up, I can't imagine what a card-carrying Satanist could possibly have contributed. I dunno, maybe he argued the devil would drive a badass black behemoth, not some rusty old Pinto.

Or maybe LaVey argued that the devil hates delirious school teachers who taunt him from the safety of a graveyard (sacred ground, where Satan is apparently prohibited from parking...I guess he'd need one of those handicapped permits or something).

Or maybe LaVey was simply handy with a wrench and could fix any mechanical problems during filming. Still, none of those reasons explains why a major studio (Universal) would think including a real-life Satanist in their film's credits would boost the box office

The car itself, created by famous car customizer George Barris (he designed the original Batmobile), looks like a cross between a Lincoln Continental and a bathtub, and is one mean machine. It flattens folks into gooey pancakes, takes out police cars two-at-a-time by rolling over them and drives through front windows of houses to nail its prey (the aforementioned school teacher). Its horn is an unholy cross between a car alarm and Fran Drescher's voice.

The movie stars James Brolin (who would later suffer more misery at the hands of Satan in The Amityville Horror) as a small-town sheriff trying to deal with a mounting body count while keeping a straight face. I wonder, when he and spouse-Barbra Streisand are comparing careers, if he’s ever said, “Sure, Yentl is a fine film, but did you ever see my performance in The Car?” If so, her likely retort would be something like, “Yes, and that’s why you haven't been in any of my movies.”

Still, The Car is a fun film in spite of its seriousness. It’s fun to watch people meeting their demise via vehicular homicide. It's even more fun to wonder why a entity as powerful as Satan would need a car to do his bidding.
Posted by D.M. Anderson at 5:18 PM