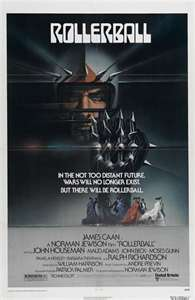 Until 1968's Planet of the Apes and 2001: A Space Odyssey, science fiction was seldom too serious...alien invaders, time travel, giant monsters, space battles, etc. A lot of those movies made the future look awesome; we cursed our bad luck for being born before flying cars, laser guns, space colonies and giant robots. Mindless fun, and mostly kiddie stuff (some of which I still love).

Then the 70s arrived, along with The Andromeda Strain, Colossus: The Forbin Project, The Omega Man, Westworld, Soylent Green, Logan's Run, Silent Running, A Boy and his Dog, A Clockwork Orange, THX-1138, et al. These mostly-dystopian movies promised us that, not only will the future suck, it's gonna kick our asses. Many directors of these films claimed to use sci-fi as a commentary on the ills of modern-day society. If so, I seldom understood any message they were trying to convey. In some cases, I still don’t. Even now, I’d love to visit Westworld, drill robot hookers and blow away Yul Brynner. And yeah, I’d take the chance on one of them suddenly turning homicidal.

Another of those dystopian nightmares was 1975’s Rollerball, Norman Jewison’s supposed commentary on society’s bloodlust, which depicts a future society controlled by corporations. Nations, war and poverty no longer exist, but the population still has a craving for death, which the world’s corporations provide with Rollerball, an unholy cross between roller derby, football, motorcycle racing and gladiatorial combat.


I’ve seen and read interviews where Jewison (in full-pretention mode) intended the audience to be appalled by the violence in Rollerball. Well, Mr. Jewison, mission failed, because you made the game so kick-ass that we all wished it was a real fucking sport (it makes the NFL look like cheerleading competitions). Hell, even the stunt guys you employed played the game in their free time between takes. If you had any other agenda, Mr. Jewison, it was lost on most folks, at least on me and my friends when we decided to try playing Rollerball ourselves in the summer of ‘76 (a year after the movie was released in theaters, but recently premiered on TV for all of us to behold).

Granted, we didn’t have motorcycles, roller-skates, spiked gloves or a speeding steel ball that could tear your head off, but we did have bicycles, skateboards, gardening gloves, old baseball helmets, a softball wrapped in silver duct tape and two trash cans placed on opposite ends of our cul-de-sac to serve as goals. We were all set.

Looking back on that incident now, maybe it was my first hard-learned lesson (though not as hard on me as it was on Mark) not to imitate what you see in the movies. But even though re-enacting Rollerball was basically my idea, I'm still gonna blame Norman Jewison for Mark's busted nose. Screw the man’s social commentary; he made the sport look like too much goddamned fun for a bunch of bored 13-year-olds to pass up.

There are more reasons why Rollerball’s violence-is-bad message falls on deaf ears...

As brilliantly conceived and shot as the game scenes are, an actual plot is required for most movies, and the plot in this one is flimsy and stupid. Rollerball-champion Jonathon E (James Caan) is a threat to the corporations because his skill defeats the purpose of the game (demonstrating the futility of individual effort). So they keep changing the rules of the game in order to eliminate him. It is never made clear why Jonathon’s continued ass-kicking is a threat, but even if it was, it seems to me that if corporations are able to keep the global population in-check, simply killing one guy shouldn’t be too tough. The last time I checked, one of the few times in history killing just one guy ever had global impact was during World War II, and that was a good thing. 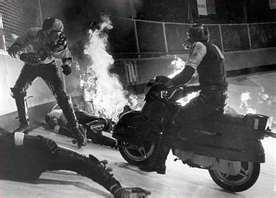 Furthermore, if Rollerball truly does sate the population’s bloodlust, yet it’s obvious everyone loves Jonathon E, doesn’t killing him lessen one’s interest in the game? Wouldn’t you want him to keep kicking-ass, especially since he is such a nice guy off the track? Consider the Chicago Bulls during the Michael Jordan era. I’m not a basketball fan, but even I sometimes tuned into games when he was playing. We loved the guy even when he was kicking the shit out of our own home team. When he decided to finally retire, there was a noticeable dip in TV ratings for NBA games. As a society, we love seeing one man totally dominate a sport, to the point where his absence makes the sport a bit less compelling. Disagree? Then when was the last time you watched a golf tournament in its entirety when Tiger Woods wasn’t playing?

In Rollerball, by trying to kill Jonathan, these corporations aren’t really doing a lot to help their cause. In fact, with every increasingly deadly rule change designed to eliminate him, the sport becomes even more popular when he overcomes the odds and wins anyway. And besides, doesn’t Jonathan’s triumph accomplish the very goals the corporations had in the first place, to placate the passive public’s bloodlust?

But I’m being way too analytical, because I’ve never met anyone who has seen Rollerball that gives two shits about the story anyway. In fact, the chapter-skip feature on your remote was made for movies like this. In-between the most awesome sports-action sequences you’ll ever see are endless scenes of dull exposition, cheesy parties, occasionally nonsensical dialogue or random shots intended to be symbolic. With your remote, it’s possible to enjoy this two-hour film in about thirty minutes, catching all of the stupendous action and still have an inkling of the plot (if you care). We get the gist of the story whenever Jonathan scores a goal or does something awesomely violent; the movie cuts to John Houseman (the evil corporate executive trying to kill him), a stern expression on his jowly puss.

Still, the very idea of Rollerball is great (and I do love this film). So even though its anti-violence message is an epic fail, out of sheer respect, I’ll mention at least one valuable life-lesson this dystopian classic does offer with utmost clarity (besides never try to play the game in your cul-de-sac with your friends):

Polyester is not, and will never be, attractive. Especially beige polyester.
Posted by D.M. Anderson at 7:14 PM