THE CASSANDRA CROSSING and the Sinister Urge 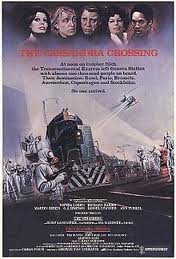 There reaches a point in every young boy's life when he goes through physical and emotional changes; he has reached the apex of childhood and begins the slow, sometimes awkward transition from into becoming a man. These are formative years; what happens during this time plays a large role in shaping the type of adult he will eventually become. No, I'm not talking about puberty and all the embarrassing baggage that entails. What I am talking about usually occurs around the same time, though, when a young man wakes up one summer morning with the compelling urge to blow shit up.
Unlike puberty, this fiery rite of passage is a communal experience, usually including friends of a similar age who are just as bored as you are (or at least have a stash or firecrackers or M-80s). Also unlike puberty, when you suddenly notice how wonderful breasts are but have no idea what to do with them, the average kid knows exactly what to do when the urge to blow shit up finally comes, which is to find some shit to blow up.
Some parents reading this may assume such urges are an indication of potentially psychotic behavior. Let me reassure you...just about every boy with easy access to fireworks has engaged in such destructive activity at least once. They can't help it; it is ingrained in the male psyche. To assume otherwise is living in denial. If you truly think your son has never blown shit up for the sake of blowing shit up, it's because he didn't run home to tell you that he just blew shit up, just like he never emerged from the bathroom and said, "Hey, Mom, I just masturbated!"
Unless you birthed a maladjusted freak who gets his kicks by sticking a firecracker up a cat's ass, the time-honored act of blowing shit up is simply a normal part of the transition to adulthood.
The most obvious targets of these urges are the toys they have outgrown...G.I. Joes, Hot Wheels, train sets, action figures. It happened to me around the age of 13 or 14. One day, after taking a long hard look at the hundreds of Hot Wheels and Matchbox cars I'd spent the better part of my first decade of life collecting but no longer played with, I came to the decision that their retirement would be best-realized by going out in a blaze of glory. And I knew just the guy to help me...my friend, Karl. I may have had the objects for destruction, but he had the artillery, courtesy of his older brother, who often drove up north to an Indian reservation in Washington to get real fireworks, not the glorified sparklers available in Oregon. Hence, Karl's garage was almost always stocked with packages of firecrackers, Roman candles, cherry bombs and M-80s.
So, one hot summer morning in July, me and Karl trucked off to a remote area with my two cases of race cars and his grocery sack of explosives. Over the course of the next two hours, we blew up every single car to tiny metal bits, and when we were done, I was exhausted-yet-satisfied. I'd sated an urge that had been welling within me for a long time.
I would even suggest this was an educational experience, though the lesson didn't really sink in for another twenty years, when my wife dragged me along on another one of her antiquing excursions. Displayed behind within a glass display case in one particular store were dozens and dozens of Hot Wheels just like the ones I blew up as a kid, only now priced at $20-100 each.
What did I learn? Fucking remorse, that's what! 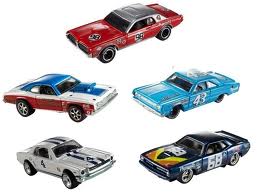 A word to the wise, especially to those of you young enough to feel the same destructive urges that I had...do not blow up your own toys. Blow up your buddy's Star Wars action figures or your sister's Barbies. Ignore your instincts, take your old toys and stash them in the attic. Twenty years down the road, you can laugh your ass off when some nostalgic boob offers you a hundred times what you paid for them with your allowance money.
If you're my age, currently beating yourself for trying to launch your G.I. Joe into space with a bottle rocket, don't be too hard on yourself. You were only acting as nature intended. You're normal.
What's abnormal are the kids who do not outgrow the urge to destroy. Back in the days before CGI took the fun out of special effects, these folks either ended up doing time, or took their love of blowing shit up seriously enough to make a living at it, such as those who created the visual effects for most of the disaster movies in the 70s.
Today, anyone with computer smarts can simulate a catastrophic train wreck just by firing-up a laptop. Back in 1976, if you were lucky, you could work for a studio that would pay you to blow shit up the same way you once did with Hot Wheels.
Which brings us to The Cassandra Crossing, a fairly minor entry in the 70s disaster sweepstakes, but one which appeals to the inherent destructive nature in most boys.
The movie itself is actually pretty good, once you get past the terrible dialogue, unbelievably stupid subplots (Martin Sheen has more WTF moments than every other character combined) and the god-awful music score. There's a potentially lethal plague onboard a European commuter train, and only a small handful are immune. That doesn't stop the American government (of course) from trying to deliberately crash the train in order to keep the virus at bay. Their plan is to guide the plague-infested train to toward the Cassandra Crossing, the rickety old bridge practically guaranteed to collapse if so-much as a moth lands on it. 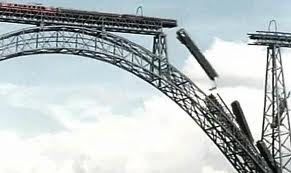 There isn't a whole lot of action until the train reaches the Cassandra Crossing. But because this is a disaster movie, and because there's been no gloriously destructive payoff thus far, it's a given that the bridge will collapse and the train will meet its end in a fiery crash.
Here is why The Cassandra Crossing is really awesome: Even back in 1976, it was obvious we were watching a bunch of guys blowing up models. The special effects aren't even the least bit convincing, yet the climactic scene is a lot of fun. We know the collapsing bridge is a model, we know the train is a model, but it's awesome for the same reason we loved destroying our old toys. We look at the climax of The Cassandra Crossing and think, "You know, I should have done that with my old Lionel Train set."
I think whoever was in charge of that scene really got-off on blowing shit up as a kid. That's what ultimately makes The Cassandra Crossing so cool...not its realism, but its obvious use of miniatures and models that get blown up in the process. Those of us who grew up in the 70s can appreciate the effort involved, just like earlier generations can still marvel at Ray Harryhausen's stop-motion effects from the 50s and 60s. Sometimes, we kind-of like knowing how things in movies are accomplished, especially if we are able to figure it out for ourselves.
Posted by D.M. Anderson at 8:41 AM