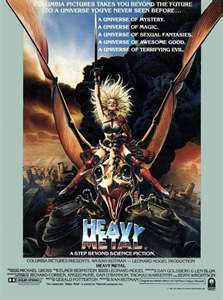 Ever watch a movie when you were a kid and thought it was uber-awesome, then revisit it years later and think, “Wow, that movie’s actually pretty shitty,” and you’re almost ashamed to admit you once liked it? For me, one of those movies is 1981’s Heavy Metal.

There are a couple of important details the uninitiated need to know about this film before we go any further...

First, Heavy Metal is an animated sci-fi anthology film featuring stories based on a popular adult comic book originally published in France. Right now, some of you might be retorting, “Heavy Metal is not a comic book. It is an adult illustrated fantasy magazine...from France.”

And what’s wrong with something being labeled a comic book, anyway? When did ‘comic book’ become such a four-letter word? Even today, if you’re of a certain age and do not want to be perceived as a maturity-stunted loser, you tend to defend your choice of printed entertainment as a graphic novel or Manga...anything but a comic book. Comic books are for little kids.

You know what? I still enjoy playing with Lego’s on occasion, but you don’t hear me referring to them as ‘simulated architecture.’ Besides, ‘graphic novel’ is simply a more eloquent way of saying ‘really expensive comic book’. As for Manga, the official Japanese definition is ‘really expensive black & white comic book that you have to read backwards.’ Folks, there’s nothing wrong with reading comic books as an adult. You do not need to justify it by calling it something else.

Second, the title has nothing to do with the heavy metal music genre, even though the ‘metal’ soundtrack (which blasted from almost everyone’s car that summer in 1981) was a major promotional tool for the film, featuring songs by numerous bands popular at the time. While it is obvious the filmmakers thought it fitting that a film called Heavy Metal should include songs from metal artists (admittedly a great gimmick), of all the artists who contributed songs for the soundtrack, only two (Black Sabbath & Blue Oyster Cult) could actually be considered metal bands. Okay, you could stretch it and include Sammy Hagar, only because he performs the most ass-kicking song in the movie. But Grand Funk? Don Felder (the guy from The Eagles)? Stevie Nicks? Devo? Journey? Jesus Christ, Journey is to heavy metal what Will Smith is to Gangsta Rap. They were the fucking Nickelback of the 80s.

I gotta admit, the list of music artists (who didn't love Stevie Nicks back then?) was a major factor in me wanting to see this movie, which was somewhat disappointing when I finally watched it. Most of these songs are buried so far down in the mix that their inclusion is perfunctory, even when later remastered for video and DVD. The songs are almost randomly inserted into the film and sound shitty, like they're being played through a transistor radio. I’m not a big fan of disco (in fact, I hate it), but at least the tunes in Saturday Night Fever were prominently featured and added auditory oomph to many scenes. I learned a valuable lesson the night I went to see Heavy Metal: do not choose a movie because you wanna hear songs. That’s what records were for.

Still, at the time, I thought the movie was great, partially because this was an adult animated film, but mainly because I was pretty stoned at the time. Which brings me to the third important detail about this film, and the key to whether or not anyone will enjoy it thirty years after its release: Heavy Metal is only good if you are high.


I went on a double-date to see the movie back in high school, and we all got pretty baked in the theater parking lot beforehand...a good idea for a movie like this, a bad idea for my relationship with my girlfriend, who was almost abnormally jealous. She didn’t even want me looking at another girl. If my eyes were simply cast in the general direction of perceived female competition, she’d throw a hissy-fit. I never realized how extreme her possessiveness was until we watched Heavy Metal, when she stormed out of the theater halfway through because she thought I was getting off on the animated boobs (of which there are plenty). Even though well-snockered, I followed to reassure her that her worries were unwarranted, mainly because, while my girlfriend’s boobs weren’t as epic and spherical as those adorning the animated tarts in Heavy Metal, I still wanted to touch them later that night. Too bad we had this little spat at that moment because, while I was groveling in the theater lobby, I missed the one truly good segment in the film, when a WW2 bomber is overrun by zombies and is forced to crash-land on an island, also overrun by zombies. Even though me and my girlfriend were both pretty messed up, I was able convince her that she was the only woman for me, animated or other wise.

At least her brief tantrum didn’t ruin my high, which made me love the film at the time. For years afterwards I ballyhooed how great it was to others who hadn’t yet experienced it, which they couldn’t easily do because it was 15 years before Heavy Metal became available on video. This was because it took forever to reacquire the rights to use all the original songs from the soundtrack (ironic, since they have no impact of the narrative). Its long absence on home video merely added to the film’s mystique. Sure, it occasionally ran on HBO (which I didn’t have) in the middle of the night, but other than that, Heavy Metal was the title most movie geeks were salivating over to include in their video collection.

In 1996, the long wait was over. Heavy Metal came out on VHS and I snapped up my copy the day it was released. By this time, I was 33, married for the second time and had my first daughter. Partying and drugs were part of my past, which I had long disassociated from my fond memory of this film. I just remembered it being a colorful and violent fantasy. And I assured my wife, a fantasy lover her whole life, that she’d really enjoy it as well.

We sat down to watch it that night, and it was less than five minutes into the film that I noticed two things:
And that’s just the look and sound. It only gets worse.

For the most part, the stories are simplistic and stupid, clumsily linked by the recurring appearance of an evil, glowing orb called the Loc-Nar, with god-awful dialogue and one-dimensional characters, none of whom you’ll give a shit about. Almost every story features either tons of gory violence, pandering drug humor (like the producers knew most the audience would be stoned) or impossibly voluptuous female characters, nearly all whom end up naked at some point. Don't get me wrong. I enjoy gratuitous sex and violence as much as the next guy, but in Heavy Metal, it's like watching the fantasies of a 13-year-old. In fact, one of the stories is a fantasy about a 13-year-old, suddenly transformed a lean fighting machine who also screws every woman in sight.

I think it was during the second or third story that my wife looked over at me, raised an eyebrow and said, “You actually like this?”

Suddenly defensive, I told her to give the movie a chance. It might get better. But was I trying to reassure her or myself? This was a movie I’d been championing for over a decade, but not the one I remembered in my inebriated state 15 years before. Interestingly, the aforementioned bomber/zombie segment, which I missed while patching things up with my girlfriend, is the only part of the movie which is still truly effective and creepy.

While I was happy my wife wasn’t too concerned whether or not I was digging the animated boobs, this was where her idea of fantasy differed somewhat than mine. Later on, she said “Looks like whoever drew these women were getting off on their own pictures.” 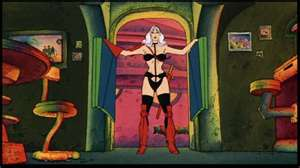 And she's right. Watching this movie today, one gets the impression the artists really were getting off on their own drawings. This tells me two things. First, that the staff hired to illustrate the movie are all heterosexuals, because every female character has a body you could bounce a quarter off of, making the bikini-clad babes of Baywatch look like contestants on The Biggest Loser, while most of the males are hideous monsters or comedic caricatures. Second, that these guys may be some of the greatest illustrators of all time, since it must take a phenomenally steady hand to draw such glorious female body parts while your other hand is busy. I don’t think that was ever a problem over at Disney (well...maybe for the guys who drew Jessica Rabbit).

Anyway, for a supposed adult cartoon, Heavy Metal is crude, sophomoric and incredibly dumb, even for its time. Today, we may chuckle at the absurdity of 80’s relics like Top Gun, Rambo, Highlander or Footloose. But while those movies may not have aged too well, they were great for their time. I can still watch most of those and enjoy them for cinema kitsch that they are. I can’t do that with Heavy Metal, which was only good in 1981 because I was 17 and stoned. Today, it’s simply a bad movie, and not even in a fun way.

Still, Heavy Metal has its fans. But I’d like to know just how many of those folks have watched it recently, without the aid of narcotics.
Posted by D.M. Anderson at 2:56 PM

Heavy Metal fills me with nerd rage over its undue praise.

The few snippets of Heavy Metal the magazine (or comic book, if you will) that I've seen weren't fabulous stories, but they had gorgeous art. Where were those artists when this movie entered production?

Who Framed Roger Rabbit was produced and released by Touchstone Pictures, a Walt Disney company.