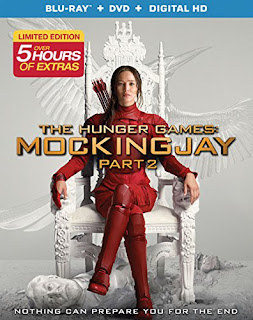 Though there remains no creative justification for stretching the final novel of Suzanne Collins' Hunger Games trilogy into a two-part, four hour film, Mockingjay, Part 2 does bring the entire saga to a satisfying conclusion. The final hour is more intense, violent and suspenseful than any other film in the franchise. But until then, Part 2 suffers some of the same woes as its predecessor.

From a narrative standpoint, Mockingjay was arguably the weakest of the three novels, focusing primarily on Katniss and her merry band of rebels infiltrating the capital city to kill President Snow and liberate Panem. Most of the more interesting characters and plot revelations were introduced in the first two novels. Padding Mockingjay's already thin story into two films essentially turned Part 1 into an unnecessarily long - sometimes excruciatingly dull - transitional episode.

Part 2 begins on similarly shaky ground. Picking up right where Part 1 left off (newcomers will be completely lost), it takes a long time to get going, the overall story once again stretched like taffy. But it starts gathering momentum once the siege on the capital commences, and we're once again captivated. Since most of us are already quite familiar with most of the players, the film now has the luxury of throwing them in harm's way without further character development. Hence, the final act is loaded enough action, excitement and poignancy to compensate for the meandering first half.


As usual, the entire cast does right by these characters, all of which remain far more interesting and complex than those in other young-adult franchises. The overall production design is also surprisingly impressive. There are occasions where the sets of the capital are almost retro, like a 1970s-era depiction of the future. Intentional or not, it gives the film an interesting look.

Still, this is only half a movie, which remains the big elephant in the room. If you're one who resents the increasing trend of studios maximizing profits by splitting stories into two or more separate films, Mockingjay, Part 2 won't sway your opinion. What could have been a compelling and concise single film is dragged out far longer than necessary. However, Legions of Hunger Games devotees will obviously argue otherwise. For them, this epic conclusion to their beloved saga delivers as promised, especially watching it back-to-back with Part 1.

NOT BAD...LIKE A HALF CAN OF FRISKIES.