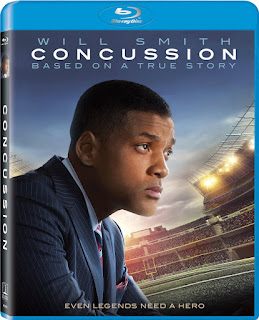 Considering all the public scrutiny the Galactic Empire NFL's been under lately (for various reasons), the timing of Concussion couldn't be more perfect. The long-term health effects that football has on its participants isn't anything new, but the findings of Dr. Bennet Omalu (Will Smith) became headline news, despite the numerous attempts to intimidate and discredit him.

But Concussion isn't really about Omalu's discovery. Anyone with a lick of common sense can conclude that years of getting bashed in the head every Sunday is bound to loosen a few marbles, no matter what safety measures are taken. So while Omalu's findings aren't exactly a revelation, the Galactic Empire NFL's attempts to keep him quiet might come as a surprise to many viewers. Then again, maybe not. It isn't as though the league has publicly done a bang-up job dealing with other recent controversies.


The NFL is definitely the evil empire in this film, with Roger Goodell (Luke Wilson) as its Sith Lord. The problem is we kind-of already suspected as much, meaning Concussion really doesn't offer any surprises. Omalu's story is an interesting one, though maybe better suited for an ESPN 30 for 30 documentary than a dramatic film. Still, the performances are worth watching. Some folks felt Will Smith was snubbed at this year's Academy Awards, and while I personally don't think he deserved an Oscar nomination, this is certainly one of his best roles.

In the end, Concussion is reasonably entertaining (though a tad overlong). It's a film we enjoy in the moment, briefly reminded that brain trauma is a serious issue facing professional athletes before we move on to other things which have a more immediate impact on our own lives. Nothing really resonates afterwards because most of us with common sense already knew all this.