COBRA: How Not To Eat Pizza 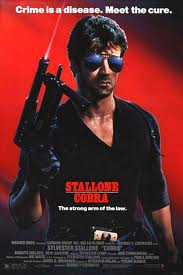 This movie tortures me. It's either the one of the cleverest movies of all time or one of the dumbest.

I’ve watched Cobra several times over the years since it came out in '86. I’ll probably watch the damn thing several more times just trying to figure it out, because I’m convinced Mr. Stallone is trying to mess with my head.

Marion Corbretti (Stallone) is the baddest member of the Zombie Squad, L.A. cops who handle the jobs no one else wants (I didn’t know cops were allowed to pick their cases). We first meet Cobretti (aka ‘Cobra’) when he’s called in to deal with a shotgun-toting psycho who's blowing away customers at a supermarket. Cobra roars up in a nitro-feuled, Titanic-sized hot rod. Decked-out in a skin-tight black T-shirt, even tighter jeans, boots, sculpted hair, mirrored shades, leather gloves and a toothpick in his jaw, Cobra makes Duke Nukem look like Justin Long. He strolls into the darkened store, finds his quarry, pops open a beer, takes a drink, tosses out a casual one-liner (“You're the disease...I'm the cure”) and blows the guy away. At no time does he remove his sunglasses.

It's at this point I'm wondering if this is supposed to be a comedy, because the whole scene is pretty damned funny, which actually makes sense when you consider Cobra began life as Sylvester Stallone’s rewrite of Beverly Hills Cop back when he was originally offered the role. Anyway, even though he saves the day, Cobra is berated by a dumbass reporter for killing the man, never mind that the perp already slaughtered several innocent people.

After another productive day of blowing folks away, Cobra retreats to his Malibu apartment. This is where the movie really gets weird. First, he turns on the TV so it can inform us of the movie's plot...a string of random axe-killings. While he's watching TV and cleaning his gun, Cobra takes a slice of leftover pizza from his freezer and uses a pair of scissors to cut off a little triangle for himself...still wearing his gloves. Then he eats it frozen.

I've occasionally seen folks use a knife and fork to eat pizza, which is somewhat anal-retentive to begin with...but scissors? Raise your hand if you've ever thought a slice of pizza was so unmanageable you felt the need to cut it into smaller pieces. And even if you are OCD, would scissors ever come-to-mind as the perfect tool for the job?

Surely, Cobra must be a comedy, because this is the most random, off the wall and downright weird scene I've ever witnessed in an action movie. And, yes, it's funny as hell.

Then the killings start. People are stalked and slaughtered by a group of axe-wielding lunatics, apparently doing this to create their own New World. They are led by a perpetually-sweaty guy called the Night Slasher (Brian Thompson), whose nostrils flare so huge you could park your car in them, and whose eyes threaten to pop out of his skull like an overly-excited Pomeranian. We're also treated to several backlit scenes of this cult ceremoniously raising their axes over their heads and clanking them together.

Then this cult makes a mistake. They leave a living witness to one of their killings, a fashion model named Ingrid, played by Brigitte Nielsen (who was Stallone's girlfriend at the time). We know she's a model by the hilarious photo shoot where she poses seductively among robots which look like there were constructed from shit kids find in the garage. Speaking of Ms. Nielsen, even though I always thought she looked like a man in drag (especially in recent years), I gotta admit Cobra is one movie where she doesn't look half bad (though he thespian skills are still all bad). 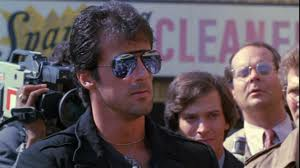 Fearing the Night Slasher will come after her, Cobra and his thankless partner, Tony (Reni Santoni), are assigned to protect her. The two also fight over her hospital food in yet-another WTF scene (there are actually a lot of strange scenes related to food). Tony reassures Ingrid that no one is better than Cobra at catching psychos, yet the audience never actually gets to witness this supposed talent. In fact, Cobra does no real detective work throughout the entire movie. Most of the time, he's running away from these psychos with Ingrid & Tony in-tow, occasionally riddling them with bullets when they get too close.

Speaking of which, the Night Slasher's cult army must consist of the biggest dumbasses to ever walk the Earth, as exemplified during a scene in which they are chasing Cobra & Ingrid on motorcycles. Cobra's in the bed of a pick-up, spraying machine gun fire at his pursuers, who drop like flies as they are gunned down. Do the others make any attempt to avoid dying? No. They keep coming (not even swerving out of the way), only to be gunned down themselves. It's like my annual battle with ants in my kitchen. It doesn't matter how many ants I dispatch with spray, traps or the good-old-fashioned fist, the other ants don't get the message and keep on coming.

Surely this must be a comedy...right?

But it's not all mayhem. Halfway through, there's the get-to-know-you scene where Cobra comments on the amount of ketchup Ingrid put on her fries (yet another random food scene), followed by a romantic interlude where Ingrid has the hots for Cobra. When she tries to get close, he warns her, “Not a lot of people like the way I live.” I don't know if this statement is supposed to signify his dedication to his job, his 'rebellious loner' status or his penchant for using office supplies to cut his food. I guess it doesn't matter, because Cobra and Ingrid end up doing doing the nasty anyway.

Anyway, by the end, after all the violent heroics, bloodshed, corny dialogue and the concluding scene where Cobra & Ingrid ride off into the sunset on a Harley to yet-another synthesized 80's tune, I'm still left with this quandary: Is this supposed to be a an ironic black comedy, or the most cynical vanity project in Sylvester Stallone's entire filmography? This very question might make Cobra one of his most watchable movies.

Even after all these years, long after I finally understood the final scene in 2001: A Space Odyssey, I'm still tortured by why Marion Cobretti feels the need to use scissors to cut his pizza.
Posted by D.M. Anderson at 5:22 PM